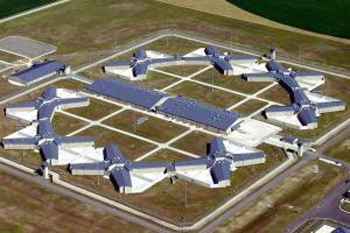 THOMSON, Ill. — In his 2014 fiscal year budget proposal to Congress, President Barack Obama recommended to fund the reopening of the maximum-security Thomson Correctional Center in Thomson.

On April 10, the President asked Congress for $166.3 million to reopen three prisons including the Thomson, Ill. facility, which the federal government purchased for $165 million in October 2012.

Along with Illinois Senator Dick Durbin, Representative Cheri Bustos, D-Ill., has been a leading voice in reopening the facility. The congresswoman wrote a letter to the President describing the benefits of opening the correctional center.

“Higher security prison facilities, including penitentiaries, are currently operating at 54 percent over capacity and medium-security institutions are 44 percent over capacity. This critical problem puts the security staff and inmates alike at risk,” Bustos wrote. “The Thomson Correctional Center can immediately alleviate some of this overcrowding with high-security bed space that would accommodate 2,600 high-security inmates, in addition to 200 minimum-security inmates.”

The Bureau of Prison’s chronic overcrowding is also taking a toll on prison infrastructure, Bustos said, including water, sewage and power systems. These operational issues could make way for serious safety issues, she said.

“The frustration and anger from a lack of resources is a precursor to inmate violence, which poses additional risk to prison staff and other inmates,” Bustos said.

The funding would also include renovations to bring the prison up-to-date by the time of its estimated opening in 2015. Projected costs include $25 million for upgrades and $168 million for equipment and staffing.

When fully activated, the Thomson prison could bring 1,100 jobs to the local community and generate $122 million in local expenditures, $19 million in labor income and $61 million in sales for local businesses, Bustos said.

“The prison’s activation would not only be good for our economy, it would generate a sense of pride amongst the surrounding communities to see the dormant facility, that to this point has been a constant reminder of broken promises, finally be put to good use,” Bustos wrote.

Construction was completed on the prison in 2001 but was unable to fully open due to budgetary constraints and controversy around the intention for the prison. The prison was initially bought with the intention of housing suspects of terrorism as part of the President’s initiative to close Guantanamo Bay detention facility, according to the Department of Justice. But political uproar quickly and unanimous approval from the House Armed Service Committee to prohibit creating a new detention center inside the U.S. shut down the plan.

In October, House Appropriations Chair Hal Rogers blasted the Obama administration’s plan to transfer Guantanamo inmates to Thomson as well as the decision to purchase the correctional facility.

“To make these financial matters more ridiculous, the federal government already owns four additional empty prison facilities, which are awaiting activation. In the very least, the purchase of Thomson is a waste — and as a Guantanamo-like facility, it could be a disaster,” Rogers said in a statement.

However, Sen. Durbin, a member of the Senate Appropriations Committee, commended the President in his step to reopen the prison.

“It’s very clear today that President Obama views the activation of Thomson prison as a high priority for America’s prison system,” Durbin said in a statement. “The Thomson prison will help reduce serious prison overcrowding, create over 1,100 jobs and bring millions of dollars in new economic activity to Illinois. I will work with Congresswoman Bustos to preserve this presidential priority.”