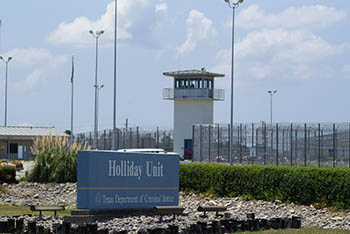 A new Texas law eliminating proxy marriages, a marriage that involves a wedding in which one party is absent, has ultimately ended marriages for incarcerated inmates. Though the Texas Department of Criminal Justice (TDCJ) has said they will make no changes to accommodate inmate marriages, this may leave the state department in violation of a federal ruling.

Before Texas banned marriages by proxy Sept. 1, the ability to marry by proxy was allowed in just four states: Texas, California, Colorado and Montana. While California only allows proxy marriages for parties in the armed forces, Montana allows for double proxy marriages.

The intention of House Bill 869 was first and foremost meant to put a stop to the ongoing fraud that was often perpetrated through marriage by proxy.

“The way we find out about this bill had nothing to do with inmates but as we got into we realized how the bill would affect inmates,” said Scott Riling, chief of staff for the bill’s author Rep. Trent Ashby, R-Lufkin.

The drafting of the bill was spurred when a divorced man, who had been in poor health for some time, passed away in Houston county. Upon his death, county officials told his daughter that the deceased man was, in fact, married again to his former wife by proxy. It was found that the woman had either forged the man’s signature or gained the man’s signature without his knowledge.

“She was basically able to marry him again and he had no idea,” Riling said.

Because of this fraudulent marriage by proxy, the former wife was awarded approximately $100,000 of the deceased man’s social security and veteran’s benefits. The woman was later indicted and convicted.

As the bill’s author studied more into the negative aspects of marriage by proxy, he found some examples of women from Mexico marrying elderly men in nursing homes without the men’s knowledge as well as inmates being taken advantage of, Riling said.

There were also instances of women coming from Europe to marry inmates, which were brokered by a woman in Texas. Some clerks have stated that inmates have found that they are married to a person who they have never met, Riling said.

“Some of these prisoners were on death row and they would secure insurance policies,” Riling said. “In Europe the death penalty is not recognized, so therefore when the inmate died she would be able to gain benefits from this.”

A somewhat similar example was in February 2012, when Texas Seven leader George Rivas was executed by lethal injection. Cheri McDonnell, a Canadian woman who witnessed his death, had married him by proxy that very day.

As Rivas mentioned Cheri in his last statement, he was obviously aware of his hasty marriage. But McDonnell acquired all the benefits of the marriage, even though the proxy wedding took place before the 72-hour waiting period, Riling said.

However, as Riling was researching inmate marriage laws and the bill moved through legislators, he contacted the TDCJ in order to notify that their policies regarding inmate marriages would have to change, he said. The criminal justice department does not allow marriages on site due to security concerns.

“At this point we have not changed our policies related to allowing marriages there on site,” said Jason Clark, spokesman for the TDCJ.

To not allow inmates to marry is in violation of a 1987 U.S. Supreme Court ruling in Turner v. Safley, which states an inmate has a constitutional right to marry.

Riling was taken aback by the TDCJ’s defiance of the ruling. Under the new Texas law, inmate’s partners are still allowed to request an absent application affidavit for the marriage license, but both parties must be present for the actual ceremony.

In each prison in Texas, Riling said, contact visits are allowed and chaplains are active in the state’s prison system.

“If they allow contact visits why could they not allow someone to come in and both parties are there the chaplain performs ceremony very quick and to the point,” Riling said.

When Riling learned about the bill’s affects on inmate marriages he started to research the marriage policies of inmates. He researched Florida, Louisiana and Oklahoma, largely republican states, as well as New York and Oregon, considered blue states.

“None of them offer marriage by proxy,” Riling said. “But they all accommodate the inmate’s constitutional right to be able to get married and they all do it in different ways.”

As Texas has said security issues are the reason behind disallowing inmate marriages, which was the same argument made in the 1987 Supreme Court lawsuit, other states have accommodated those security concerns, Riling said.

If there were severe security concerns, some states would deny marriages for a period of time, Riling said. Some correctional facilities allow a single day a month, or perhaps even one day a year, in which marriage ceremonies are allowed.

“They didn’t allow 15-member wedding parties in there, of course, it was just the individuals getting married,” Riling said.

Inmates incur all costs associated with their marriage and some correctional facilities even transport inmates to a county courthouse in order to attend the ceremony.

The vast majority of states in the U.S. allow for inmate marriages, and Texas’ failure to afford that same right makes them vulnerable.

“You’re denying those prisoners their constitutional right,” Riling said. “So, they’re opening themselves up for a lawsuit.”

It is unknown if there was any kind of rush to marriage before the bill took effect, as the TDCJ does not track marriages by proxy. As it stands, the TDCJ is adamant that there will be no marriages in the prisons of Texas.

“The legislation will have no foreseeable affect on the agency or its policies,” Clark said.

The issue of inmate marriages is simply out of the legislatures hands, Riling said. In the eyes of the bills authors, what began as a way to protect citizens’ benefits has taken an unwarranted turn for Texas inmates.

“Our purpose in the bill was not in any way to infringe the rights of prisoners or to prevent them from getting married,” Riling said.