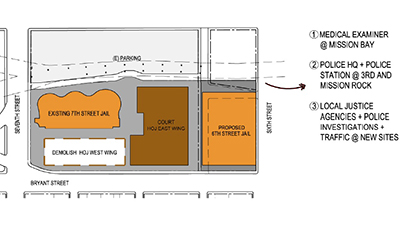 The current HOJ facility, located at 850 Bryant Street in San Francisco, was built in 1958. Since then, two additions — a two-story addition above the coroner’s office and a rooftop gymnasium serving County Jails One and Two — were made. The 608,000-square-foot building houses the Superior Court, Police Headquarters, the Police Investigative Unite, the Police Forensics Services Division, the Office of the Chief Medical Examiner, County Jails Three and Four, Adult Probation and the District Attorney’s Office.

Charles A. Higueras, FAIA, project manager for the San Francisco Department of Public Works, gave a presentation about the HOJ replacement strategy and contracting opportunities for construction and professional services.

The current building has several issues that require it to be replaced. It was rated with a Seismic Hazard Rating 3, which means it would undergo significant damage in a major earthquake and cause cessation of all building operations. It also has obsolete building systems that do not meet building codes, and it’s about half the size required to meet current standards.

The capital program plans to relocate the HOJ’s departments and demolish the building’s current west wing. The project has four guiding principles: to seek efficiencies and economies when practical (avoiding costly interim facilities), to sustain the court and jail relationship by keeping them adjacent, to maintain other beneficial adjacencies and to provide separate venues when necessary.

The $1.6 billion program budget is being allocated to several projects that relate to replacing or relocating the HOJ facility. The new Public Safety Building at Mission Bay is budgeted for $243 million. Topping out of the new facility, which will house the San Francisco Police Department headquarters, the Southern District Police Station anew firehouse and community center, happened in April 2013, and the project is scheduled for completion in November 2014. HOK is serving as the architect, while Charles Pankow Builders is the construction manager. Both have offices in San Francisco.

The Office of Medical Examiner project was allocated $65 million from the budget. It will include a 48,821-square-foot replacement facility, with construction expected to begin in spring 2015 and be completed in fall 2016.

The San Francisco Police Department (SFPD) Forensic Division and Traffic Company will cost $165 million to complete. The 105,000-square-foot replacement facility will feature 85,000 square feet for the Forensic Services Division and 20,000 square feet for the traffic company, as well as a 46,800-square-foot parking structure. Construction is scheduled to start in spring 2016, with completion in fall 2018.

The Replacement Jail facility will cost $290 million to complete. The project scope includes 481- to 688-rated jail beds and the associated jail infrastructure, as well as inmate rehabilitation program facilities to reduce recidivism. Minor integration projects, such as medical and food services improvements, will also be included to adapt the current jail system with the replacement one. Design is scheduled to start in May 2014, with construction beginning in January 2017 and project completion in December 2019.

The District Attorney and Adult Probation facilities will cost $225 million, and construction on replacement jails for Jails One and Two is slated for 2021. Deferred Justice Facility Improvement Program projects will receive $170 million of the budget; however, construction will not begin until 2026 or later.