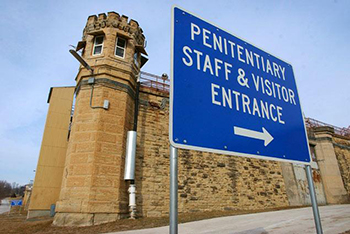 The new 92-acre men’s penitentiary in Fort Madison was constructed by HOK and will comprise 12 new buildings with a total of 472,000 square feet. The 30-acre women’s facility in Mitchellville was built by Chicago’s Walsh Construction and includes dedicated mental health, special needs, assisted living and hospice beds, as well as a 48-bed unit for new offenders. The new facilities cost the state a combined $217 million and will together provide beds for approximately 1,200 inmates. Both projects were initiated under former governor Chet Culver in 2011, and will begin transferring inmates in early 2014.

In a ribbon cutting speech Branstad highlighted the state’s efforts to upgrade its correctional facilities, noting that parts of the Iowa State Penitentiary specifically date back to 1839, before Iowa was even made a state. The governor also highlighted the recent shift from paper to digital record keeping and other technological improvements.

Branstad also commented on Iowa’s progress in reducing both prison populations and repeat offenders. Current estimates put the number of Iowa inmates at 8,230, down significantly from 8,850 when Branstad first came back into office in 2011. As these correctional populations drop, the state should also see spending decrease said Iowa Department of Corrections spokesman Fred Scaletta. He added that the state annually spends $33,145 per inmate.

Director of Research for the Iowa Department of Corrections, Lettie Prell also believes Iowa’s noticeable drop in recidivism rates are something to celebrate. In 2004, roughly 33.9 percent of recently released offenders were re-incarcerated within three years. In 2009 that number was down to 30.8 percent, according to a Nov. 2012 report. Both Branstad and Prell give credit to better ex-offender programming and more support for specific at-risk populations. Branstad also commended the state’s parole board for their key role in improving the system. “I give a lot of credit to the parole board. They now have a system to predict whether or not an individual is like to recidivate, to commit another crime,” said Branstad.

Though the state is making progress among offender populations, Danny Homan, president of the Iowa Council 61 of the American Federation of State, County and Municipal Employees, believes the current facilities do not meet staffing requirements. The Branstad administration agreed that prison staff numbers are indeed down, from 2,792 employees in 2011 to 2,646 earlier in 2013. However, Branstad spokesman Tim Albrecht maintained that the state’s staffing levels were both safe and on target.