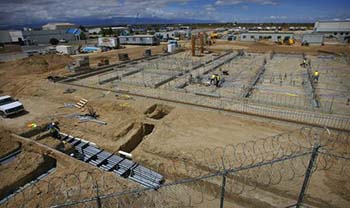 The original contract with Bellevue, Wash.-based Lydig Construction, which started in December 2010, had an about $91 million construction budget, but the project will likely cost more than $29 million over the original construction budget, according to the Victorville Daily Press. The entire estimated project cost thus far — including administration, utilities, permitting, testing, inspection, equipment, telephone and data — is $145.4 million, or $1.4 million over its current $144 million total budget, and $25 million over the $120 million budget from 2010.

Unforeseen challenges and extra work needed by third parties has resulted in 12 approved change orders and 13 approved amendments throughout the course of the project, which have added to the construction cost and time spent on work. The most recent change order requested in mid-January requires another $379,000 in funding. That money will go towards a redesign of the radio system, miscellaneous changes to the water facility, modification of a drainage system on the north side of the facility and modification of the existing planters on the south side of the facility. It will also include upgrades to facility elevators and fire alarms.

San Francisco-based HOK was the architect on the project. The design consists of multi-story housing units, which hold 456 inmates each and triple the capacity of the jail. Each unit is equipped with a separate video office, allowing inmates to interact with visitors remotely. The units are also self-contained; a nurse’s office, a recreational room and educational areas are accessible to inmates in each unit, minimizing the need for inmate movement. Two-person cells have multiple security features to keep both inmates and prison personnel as safe as possible. When it opens in February, a currently undetermined number of high-risk inmates will be transferred to the new housing area. In the meantime, the county is instilling additional precautions to increase safety within its prisons and cut down on inmate crime and escapes.

The project is another part of the plan created by the California Department of Corrections and Rehabilitation to accommodate the influx of inmates under Assembly Bill (AB) 109 or the (Public Safety Realignment Act) passed in 2011. About $100 million in funding will come from the state using money from the $1.2 billion state-approved jail construction bill in 2007. Of the county’s $44 million pick-up, $39.2 million has previously been funded primarily through Future Space Needs Reserves and Ongoing Contingency, as well as High Desert Public Safety Operations Center Project savings, while the additional $4.8 million was funded out of General Fund Contingencies.

The San Bernardino Sheriff’s Department is seeking funding for other projects in the area as well. They are seeking $80 million for the Glen Helen Rehabilitation Center from the $500 million in funding from Senate Bill 1022, which counties can apply for to assist with jail construction and upgrades due to realignment. The county would also give more than $26 million for the project, and the other $3.9 million would come from in-kind contributions.