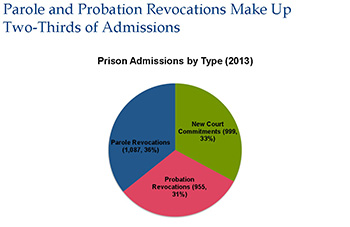 Over the past decade the state has seen a 22 percent uptick in crime rates, and projections show that rate could climb by an additional 37 percent over the next 20 years. According to a release issued by the governor’s office, this could require 2,700 new prison beds.

"We’re calling on the foremost experts on public safety to create a new roadmap for our criminal justice system," said Gov. Herbert in a statement. "The prison gates must be a permanent exit from the system, not just a revolving door. Just like every other area of government, we need to ensure we are getting the best possible results for each taxpayer dollar."

The state, which currently maintains a recidivism rate of 46 percent, will receive technical assistance from The Pew Charitable Trusts through the Justice Reinvestment Initiative, a public-private partnership between the organization and the U.S. Department of Justice’s Bureau of Justice Assistance.

The organization and the state have been collaborating on the issue for some time, and a July report by The Pew Charitable Trusts showed the state’s prison population is growing more rapidly than the national average, at 6 percent compared to 4 percent. The state is now entering the second phase of its work with the organization, which will focus on developing policies and reform proposals for state correctional and justice agencies, as well as the Legislature.

"The Legislature must not simply consider when and where and how big to build our new state prison, but also what kind of a criminal justice system will be best for Utah in the years to come," Senate President Wayne Niederhauser said in a release. "It is time to reassess our sentencing and corrections policies to ensure offenders not only pay their debt to society, but become productive, strong law-abiding citizens upon their release."

The move has received support from Utah’s Deseret News, which recently published an opinion piece applauding the focus on rehabilitation. “This state-by-state reform initiative could portend a historic adjustment of traditional attitudes toward those who commit nonviolent offenses without diminishing the importance of meting out appropriate punishment for criminal behavior,” said the newspaper.
According to the Deseret News, the state’s current mandatory-minimum sentencing guidelines are a “significant contributor” to its prison population growth, and have resulted in a marked increase in the number of offenders sent to prison for non-violent crimes, as well as the length of sentences.
"We know so much more today than we did 40 years ago about what works to reduce recidivism. Programs like drug and mental health courts, for example, have transformed the way we hold nonviolent offenders accountable and reduce repeat crime," added Chief Justice Matthew Durrant in a statement. "We must examine these and other evidence-based programs and practices as we build a more effective and efficient sentencing and corrections system in the state."

The commission will submit recommendations to the governor and Legislature in November for consideration in the 2015 legislative session.