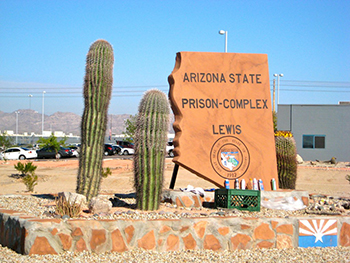 BUCKEYE, Ariz. — After allowing media outlets to tour the state’s new $50 million prison in early November, the Arizona Department of Corrections has officially opened the new section of the Lewis Prison Complex in Buckeye. The maximum-security prison within the Rast Unit, will increase the complex’s capacity by 500 beds and help ease the strain on other facilities throughout the state.

Statistics published by the National Institute of Corrections show Arizona’s crime rate is roughly 25 percent higher than the national average. The state’s federal facilities currently house just less than 5,000 inmates, according to the Federal Bureau of Prisons, while the state’s total prison population is currently hovering around 41,000. That population has increased each year since 1974, jumping by 2,000 inmates between 2013 and 2014 alone.

“Part of the reason that we decided that this unit was going to be necessary to our operation was because we were looking at population statistics that indicated an increase and that hasn’t changed," Arizona Department of Corrections Spokesperson Doug Nick told KJZZ Radio. "We are still looking at that there is growth in the system and we need to manage those beds.”

Nick added that the Arizona Department of Corrections will move maximum-security inmates previously held in facilities throughout the state into the new structure. This will free up space elsewhere in the state’s correctional system for “some of the more predatory inmates that require special management,” according to Nick. The majority of these inmates, an estimated 325, will reportedly be transferred from the Eyman unit of Florence Prison located in Florence.

With increased security technology and a modern, centrally located control room complete with touch-screen monitors, the new facility allows prison administrators to conduct improved inmate monitoring. The facility is also fully ADA compliant, with cells and bathroom facilities designed to serve inmates of various physical abilities. However, the inmates will spend much more of the day outside of their cells than is allowed in other similar facilities and are expected to participate in work programs, strictly supervised classes and controlled recreation. Cells will be reserved primarily for sleeping.

Arizona Department of Corrections Director Charles Ryan told KGUN News in November that overcrowding was a likely contributor to stress within correctional facilities, which prompted the department to develop a system and structure that allows for more time spent outside the cell.

Despite the overcrowding ease, prison construction opponents have called the project wasteful and have urged the state to instead adopt sentencing reform measures.

The new prison is part of the sprawling Arizona State Prison Complex located west of Phoenix in Maricopa County. The complex is comprised of more than a dozen different facilities operated by the Department of Corrections, each named for a correctional officer who was killed in the line of duty.