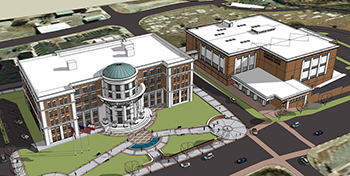 CUMMING, Ga. — Construction on the new Forsyth County Justice Center in Cummings is currently on track to debut this spring. The design includes a five-story courthouse and adjacent jail, both of which are being built to enhance security as well as be flexible for expansion.
The current courthouse is 52,057 square feet. It was reconstructed in 1976 after a fire and remodeled in 1996, according to a statement by Forsyth County Manager Doug Derrer. The jail was constructed in 1976 as well and is 22,714 square feet. Both are undergoing new construction to keep up with rapid population growth in the county.
The layout of the new justice center was designed to present a positive appearance to the community. The public and staff entry to the courthouse faces the town green, while the jail lines the building perimeter.
The project manager is Miami-headquartered CGL, while architectural and engineering firms include Norcross, Ga.-based Wakefield Beasley & Associates, San Francisco-based HOK and Pond and Company, also based in Norcross. The joint venture of Turner/Winter is serving as the construction manager.
The 160,000-square-foot courthouse was designed to allow members of the public, judges, staff, jury and detainees to enter and exit courtrooms independently without crossing paths. The building’s entry level is situated on the second floor and requires a large amount of public access. As such, this floor contains the jury assembly and court offices, while the courts comprise the upper levels and the top level is being dedicated to the Superior Court. The five floors of the courthouse will house the Superior Court, State Court, Solicitor-General, District Attorney, Clerk of Courts, Court Administration, Grand Jury and Jury Assembly. One large courtroom on each level will be able to host higher-profile cases.
“Approximately 120,000 square feet will be finished, and the balance of the space will be shelled. This will provide approximately 30,000 square feet that can be finished in the future to add courts and help meet demands associated with future growth,” Derrer said in a statement.
Art at the courthouse will include pictures of older courthouses and a statue of Lady Justice outside. There will also be nine replica documents, including the Bill of Rights, Declaration of Independence and Ten Commandments, on display inside. A time capsule will also be sealed sometime after the ribbon-cutting event, containing a letter from elected officials, a signed list of those in attendance the day of the event and other items, according to Forsyth County News.
The 175,000-square-foot jail is connected to the courthouse by a secure underground tunnel. The four-story jail will hold be able to hold up to 608 inmates and is designed to contain a maximum-security level. The facility will have three levels for inmates and an additional support level. The jail, similar to the courthouse, has been designed with future expansion in mind. Energy costs at the jail have been kept to a minimum as well, with an estimated cost of $1.08 per square foot and efficient staffing levels.
Voters approved the Special Purpose Local Option Sales Tax (SPLOST) VII program in November 2011, which gives $100 million to fund the new courthouse and jail. The jail is estimated to cost approximately $41.5 million, while the courthouse cost will be just over $31 million. Two new parking facilities and related improvements will cost an estimated $7.9 million, while renovations to the existing courthouse will be about $1 million.
The courthouse is currently scheduled to have its opening on March 16, with a public ribbon cutting on March 12. The jail is scheduled to open on April 9.