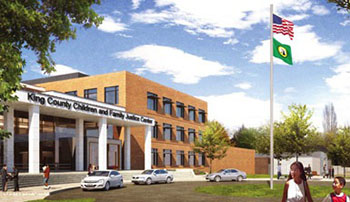 SEATTLE — The Metropolitan King County Council voted 7-0 Monday to approve a $154 million contract with Seattle-based Howard S. Wright, a Balfour Beatty company, to construct the Children and Family Justice Center (CFJC) in Seattle. The project would include a modern, efficient and safe facility to support court and family services.

The King County Youth Service Center (YSC) collocates juvenile detention facilities, juvenile courts and other related functions on approximately nine acres in the southwestern part of Seattle’s Central District. Replacing the aging facilities at YSC has been the county’s highest priority capital project since 2008, according to the King County website.

The current facility handles north county juvenile dependency, truancy, at-risk youth, child-in-need-of-services cases and countywide juvenile offender matters. The current facility is often overcrowded and stressful for users, and is inadequate for modern innovations and programs for juveniles, reported the Enumclaw Courier-Herald. There have even been serious issues with the current building’s electrical, heating and cooling systems as well as major plumbing problems that include sewer gasses permeating lower levels and brown water coming out of the faucets.

In August 2012, 55 percent of King County voters approved a nine-year property tax levy lid lift of seven cents per $1,000 of assessed value to raise the approximately $210 million needed for construction of the CFJC. The project will replace the three current buildings on site — the Alder Tower, Alder Wing and Youth Detention Facility — with a new courthouse, detention center and parking garage. The county’s Facilities Management Division is overseeing design and construction of the new buildings.

King County officials spoke to stakeholders and residents in the area about their priorities for the redevelopment of the site. Community priorities include making aesthetic improvements to enhance the neighborhood and community, bringing retail to 12th Avenue in a mixed-use development, exploring adding housing on the property, enhancing open space and improving access through and around the campus.

The project will feature 10 courtrooms within 137,000 square feet of space, while the detention center will include 11 living halls with 144 dorms within 92,000 square feet of space, according to the county website. The goal is to provide a unified family court with space for collocation of programs and services for families and youth. The detention center will also provide a safer and more efficient facility with built-in flexibility to respond to changes in population.

Several members of the community came to the council meeting to voice their opposition of the facility, saying that they were mislead by the language of the 2012 ballot measure to fund the children and family justice center, not realizing it was for a detention facility, reported the Seattle Times.