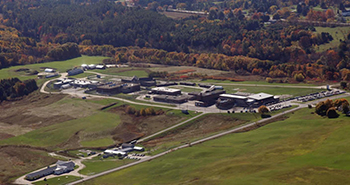 If approved, the $10 million, 24,000-square-foot facility will be built on prison property along River Road. However, Windham citizens and members of the Windham Planning Board felt not enough warning or information had been provided about the facility. After receiving an open letter from three state lawmakers, the MDOC agreed to host three public information sessions outlining the new reentry center plans, as well as a tour of the Maine Correctional Center also located in Windham, for a delegation of local leaders. The first two sessions were held March 18 and March 21.

If built, the proposed Maine Department of Corrections (MDOC) Women’s Re-entry Facility will sit on the undeveloped eastern side of a 108-acre, MDOC-owned parcel that already houses one other correctional facility. Per current plans, the project will include a range of housing levels across three medium-security units, a 40-space parking lot, new driveways and drop off areas, a delivery loop, new sidewalks and the extension of existing utilities. The facility would also offer more rehabilitative programs and assisted living beds for aging inmates.

MDOC officials have been working with architectural firm SMRT Inc. of Portland, Maine and S.W. Cole Engineering Inc. of Bangor, Maine to develop project plans.
Pulitzer/Bogard & Associates LLC of Lido Beach, N.Y. and SMRT Inc. completed the project’s feasibility study in February. That study concluded that the reentry center would provide a positive economic benefit to the state and will enable MDOC to do “more with less.” The team also found that alternatives to constructing the reentry facility would be more expensive and that the project will positively realign the system capacity.

In terms of inmate per diem costs, Maine has the ninth highest figures in the country, and this project is projected to lower current figures by more than 14 percent. In addition to pumping roughly $118 million in the local economy, the project will also increase public safety and staff efficiency, SMRT Inc.’s Public Safety/Criminal Justice Market Sector Leader Arthur Thompson told The Windham Eagle.

However, before the project can progress to design and construction it first needs to clear the legislature and gain approval from the Maine Department of Environmental Protection. Bidding would commence following that approval, and — if given the green light — the facility may be completed within the next three years. It will also replace the 64-bed Southern Maine Re-Entry Center in Alfred, which the department currently leases.