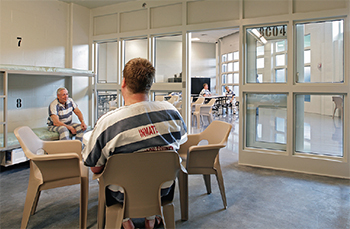 With dwindling options for state-level mental health treatment, county jails are managing a population of inmates that they are often ill equipped to handle. According to the Department of Justice’s 2006 Special Report, 64 percent of those being held in local jails had a mental illness, up from 16 percent in 1998. Of these, 70 percent were involved in nonviolent offenses, and just one in six had received treatment while in jail.

Across the U.S., officials are addressing the issue they can no longer ignore. Last year, then-mayor Michael Bloomberg asked New York judges to prioritize treatment options. In Michigan, a statewide expansion of mental health courts is underway. In Kansas, some counties are working to divert mentally ill offenders from jail and make their jail more responsive to the new reality.

Incarceration can re-traumatize those with mental illness, according to the National Alliance for Mental Health (NAMI). Without treatment options, offenders can come out worse than when they went in. The growing number of mentally ill inmates also compromises the operation of county jails. Facilities meant to safely and humanely hold those who are awaiting trial or serving short sentences for nonviolent crimes are often poorly suited to house the mentally ill.

A normalized environment. “A jail is not a good place for someone with mental illness,” said Margaret Severson, JD, MSW, researcher on mental health in the criminal justice system and professor at the University of Kansas School of Social Welfare. “The typical design lends itself to isolation, and the materials used are harsh. Environmentally, it is an incredibly difficult place, especially for those with perceptional disturbances, hallucinations and anxiety disorders.”

Hard, concrete environments create noise levels that can disturb those with brain disorders, while softer, more natural environments can help inmates calm themselves in an unknown setting. This is not about coddling people. It’s about giving them a familiar-feeling environment that makes them better and not worse. From choice of flooring and furnishings to how spaces are set up for socialization, the jail environment can either aggravate or reduce behaviors.

Well-designed intake spaces. “You need to be intentional about how you introduce people to your jail,” Severson said. That means understanding what it’s like to enter the space as a person with mental health issues, and creating a sense of safety based on this. A preferred intake area may include designated spaces for booking, administration, physical and mental health assessments, phone calls and orientation on jail rights and rules. It may mean replacing the concrete booths and mesh walls that create barriers and a sense of unease during initial interviews, or adding observational cells to watch new arrivals more closely in their first 48-72 hours. “Space becomes very important in the intake process,” says Severson. “Our mission in jails is safety and security. We get that by creating safe spaces.”

Light, bright and visible. Natural daylight is a basic human need. This is about keeping people healthy. Jails can provide natural sunlight exposure through landscaped courtyards that are visually confined from the street as well as rooms and cells that take advantage of natural light and paint colors that reflect light and enhance visibility.

Most jails now have cell doors with small windows, but windows could be larger, allowing officers to see in and allowing inmates to see out. For many people with mental illness, it’s important to know what is going on in their environment, and how they interpret that can determine their behavior.

Diverse housing options. Housing people in small individual cells is the most expensive way to hold inmates. A diversity of housing options with the proper levels of supervision and opportunities for treatment can help jails better manage a changing population. While there will always be a need for individual cells, medium-security pods may include larger cells designed for two people, while minimum-security pods may include multiperson dorms. For those at risk of self-harm, crisis cells may include intercoms for emergency contacts, beds without spaces underneath, no hooks or removable items that can be used for injury, and appropriate, nonharmful windows and fixtures.

Once jails become crowded, people may be assigned to housing based on where there is space, not based on how they are ideally classified. “We don’t have options for people with mental health problems,” said Craig Weinaug, county administrator in Douglas County, Kan., where officials are evaluating future needs as part of an expansion study. “In 1992, we were running a jail in the back of the administration building. Back then, you didn’t hear the words ‘mental illness’ related to jails.”

Treatment spaces. In her 2013 research report, “Mentally Ill Offenders
Involved with the U.S. Criminal Justice System,” Christine Sarteschi of Chatham University found that while mentally ill offenders are constitutionally guaranteed basic mental health treatment while in jail, this right is not adequately fulfilled.
Natural daylight is a basic human need. Jails understand that they have become human service providers, but the reality is a significant impact on their building and staffing budget, Weinaug said. “Our mission is custodial — to help them improve and not become worse off — and that means a more therapeutic environment and a staff of psychologists and mental health workers.”

While the jail of old offered 8-foot-by-10-foot concrete cells, the modern jail may include programming spaces to hold psycho-education groups and medication education, informal education spaces where tables and chairs can be pulled together, and basic physical and mental health clinic spaces.

Basic human needs. We all have a human need for privacy, yet this is lacking in many jails. For the mentally ill, this can be an even more aggravating factor — and sometimes presents a safety issue. Solutions include an adequate number of showers, toilets and sinks for the number of people in the space, as well as a reasonable level of privacy while those spaces are being used. New technologies, such as electrified switch glass, offer new possibilities for balancing needs for privacy and control with light and monitoring, allowing inmates to switch the glass on for privacy while still allowing staff to track movement.

Even if you’re not building a new jail, there is always something you can do to make the existing environment work better, according to Severson. Perhaps it is creating space by tearing down walls or replacing windows or doors. When the layout is not ideal, it may still be possible to replace bunks, put new furniture in day rooms or allow inmates into in-unit social spaces more often. “Whatever we can do within the environment to help calm people is going to benefit the management and safety of that whole jail system,” she said. “When people are calmer, they behave better.”

Daniel R. Rowe is a principal for Treanor Architects Justice Studio based in Lawrence, Kan.