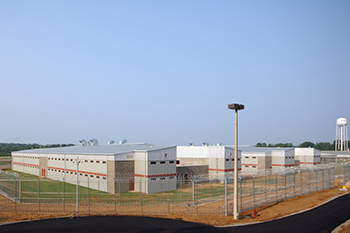 WALNUT GROVE, Miss. — After U.S. District Judge Carlton Reeves extended the term of a consent decree involving the seven-unit, 1,260-bed Walnut Grove Correctional Facility in Walnut Grove, Miss. earlier this month, a lawyer for the state’s corrections department invited the judge to visit the private prison for a firsthand look at operational improvements.

Walnut Grove Correctional Facility first came under fire in 2010 when the American Civil Liberties Union (ACLU) and Southern Poverty Law Center (SPLC) sued a number of parties, including the Walnut Grove Correctional Authority and operators Management & Training Corp. of Centerville, Utah and Boca Raton, Fla.-headquartered The Geo Group Inc. The suit maintained that staff members at the facility — which prior to the suit housed both adult and juvenile offenders — abused their authority by selling drugs to inmates, physically abusing inmates, using harmful chemicals to blind or incapacitate them and engaging in sexual relationships with them. Inmate testimony added that gang violence was rampant in the facility, where inmates regularly rigged cell doors to prevent them from locking and used contraband such as cell phones, drugs and alcohol.

A U.S. Department of Justice report completed in March 2012 found that the state showed “deliberate indifference” in failing to protect youths from harm in seven major areas: sexual misconduct between guards and inmates; use of excessive force by guards; excessive use of chemical agents; poor use-of-force policies, reporting, training and investigations; youth-on-youth violence and sexual assault; and seriously inadequate medical and mental health care. Reviewers added that the degree of sexual misconduct “was among the worst that we have seen in any facility anywhere in the nation.”

The two sides reached a settlement that year under which all juveniles in the state were removed from privately operated facilities and placed in youth-specific housing. The settlement called for an end to the use of solitary confinement on juveniles end, and that the state provide juvenile offenders with a variety of supportive and rehabilitative services. Additionally, the consent decree requires the Mississippi Department of Corrections (MDOC) to protect adults housed at Walnut Grove from physical and sexual abuse, violence, excessive use of force and prolonged isolation. It also required the MDOC to increase operator oversight, and required the facility to submit to regular reviews by court-appointed monitors.

While the decree was originally scheduled to expire in 2017, the MDOC is now arguing that sufficient improvements have been made. The Clarion-Ledger reported on April 23 that corrections expert Tom Roth had found “a substantial reduction in inmate violence” and that both staffing levels and environmental security were up to standards. Also in a hearing earlier this month, Gary Friedman, a lawyer representing the MDOC and operators, said that correctional officer training has been improved and that inmates are no longer able to rig cell doors. The court-appointed monitor, however, maintains that the facility is not yet prepared or able to provide a safe environment to inmates.