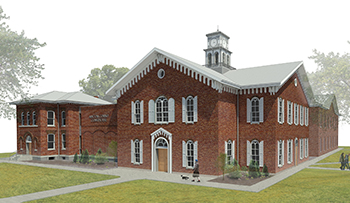 MACON, Mo. — A groundbreaking ceremony was held on May 26 for the new Macon County Courthouse and Jail project. During the ceremony, three county commissioners took turns discussing the courthouse jail project, which they began planning several years ago.

District 1 Commissioner Drew Belt said that he toured the jail 14 years ago in 2001 when he first noticed the jail had structural problems. From then, the Commission monitored the cracks in the walls to see how much they moved over time, reported Macon The News.

Much later in 2010, the Commission hired Jennifer Wilson to inspect the jail and courthouse for recommendations on future repairs. A grand jury was formed in 2012 to tour the jail, and they suggested it be condemned. At this point, a committee was formed to investigate the project needs further. Belt added that the Commission worked hard to find ways to fund the project and informed the community as much as possible to get feedback.

The project includes constructing a new 45-bed jail and renovating the 150-year-old courthouse. The new 10,000-square-foot jail addition will be connected to the existing courthouse and will include four dayrooms along with intake and booking functions. The second floor above the jail will include new space for courts.

“The exterior skin consists of structural precast with brick veneer to match the existing courthouse,” said Ben Vanderau, senior project manager for JE Dunn. “The masonry cells will be equipped with a state-of-the-art security electronics system.”

He added that the 150-year-old courthouse is being renovated with additions to preserve the historical attributes of the second oldest courthouse in Missouri. The office spaces will be renovated to accommodate the sheriff’s department and new additions will be added to connect the courthouse to the existing annex and assessor’s offices.

During the groundbreaking ceremony, a representative from Shive Hattery informed the crowd that he believes the new courthouse and jail will provide safety and security for courthouse workers and members of the community. It will help for the jail to be connected to the courthouse so inmates will be transferred inside the building instead of outside, reported Macon the News.

During construction, all county personnel will relocate to the former MoDOT maintenance garage building, and court cases will be held at different locations such as Macon City Hall, Floral Hall and the Expo Center at the Macon County Fairgrounds. Small hearings will take place in the designated hearing rooms at the former MoDOT maintenance garage. In addition, the street from the northwest corner of the courthouse to the southeast corner of the jail will be permanently closed, according to Macon the News.