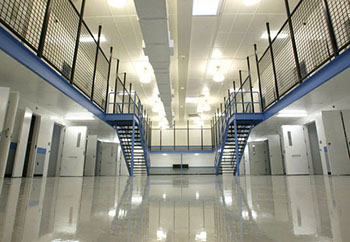 BALDWIN, Mich. — Plans are moving forward with the re-opening of the North Lake Correctional Facility in Baldwin. The 1,740-bed facility, owned by Boca Raton, Fla.-based The Geo Group, a private prison operator, recently signed a contract with the Vermont Department of Corrections to house up to 675 inmates at the Baldwin facility as early as July. The GEO Group also signed a contingency contract with the Washington Department of Corrections to hold up to 1,000 inmates in the case that Washington ever needs to send inmates out of state.

“We are moving forward with the mobilization of our company-owned North Lake Correctional Facility in Michigan at this time in order to adequately prepare the facility to meet the current demand for out-of-state correctional bed space,” said George C. Zoley, CEO and chairman of the board of The Geo Group, in a statement. “We look forward to working closely with the community of Baldwin and Lake County to ensure the successful mobilization and ultimate reactivation of this important facility.”

The facility was built in the late 1990s with approximately 500 beds and was expanded to its current capacity in the late 2000s, said Pablo E. Paez, vice president, corporate relations for The Geo Group, which has owned the facility since its development. The facility has been mostly idle since 2005 when the state of Michigan discontinued its use. It is rated to house medium- and maximum-security inmates, and no construction or renovations will be needed to reactivate the facility, he added.

When inmates are moved to the facility, about 400 staff members will be needed to operate it. This would make the prison the largest employer in Lake County. Open positions range from academic instructors to cook supervisors to X-Ray technicians.

Legislation sponsored by Rep. Jon Bustead, R-Newaygo, would allow the prison to take Level V inmates who can only be housed in maximum-security prisons. In May, the House voted 57 to 53 to allow the prison to accept Level V inmates, according to The Detroit News. The bill moves to the Senate before it would need to be signed by Governor Snyder. Corrections officials have inspected the North Lake Correctional Facility and determined it can safely handle Level V inmates, according to Chris Gautz, spokesman for the Michigan Department of Corrections.

The facility previously served as the Michigan Youth Correctional Facility, according to MLive.com. The state terminated that contract in 2005, but a 2006 law allowed the company to use it to house inmates from other states. The prison briefly housed some inmates from California, according to the Senate Fiscal Agency, but has been closed since 2011. A 2012 law allowed the state to house Level I to IV prisoners in the private facility, but that has yet to happen. In 2013, The Geo Group submitted a bid to the state to operate a privately run adult prison. The $18.6 million price tag was 44 percent higher than the direct cost for the state to run a facility, state budget officials said at the time.

For security reasons, Paez said that The Geo Group is unable to comment on specific opening and transfer dates or activation details.