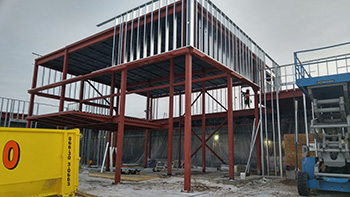 MCKENZIE COUNTY, N.D. — North Dakota’s Bakken oil field region is an expansive boomtown. The region’s meteoric population growth began in the mid 2000s as oil companies flocked to the area, bringing with them throngs of new workers. While this type of growth is often beneficial for a small community, McKenzie County law enforcement and correctional officials in particular quickly became overwhelmed by the extreme uptick in crime that followed.

McKenzie County is currently erecting a new $57 million, 129-bed correctional facility that will eclipse its existing 18-bed structure, better preparing it to handle changing correctional and detention needs. The county partnered with the Grand Forks, N.D., office of ICON Architectural Group, the Grand Forks office of construction manager Construction Engineers and Miami-headquartered CGL to make the much needed project a reality. Construction began in May 2015 and is expected to wrap up in May 2017.

CGL and ICON Architectural together crafted a master plan for the new 93,000-square-foot jail and law enforcement center. The design will meet national ACA standards for local detention facilities and will serve minimum- to maximum-security inmates. It will include a state-of-the-art open area intake center to book and process inmates and two housing units, each divided into four pods. Units will range from administrative segregation to double bunks. Each unit will also feature its own dedicated program and recreation space.

Additionally, the facility will essentially have two components: A secure county jail and a more public side for law enforcement offices. As such, the building itself also has two distinct characters, according to Cameron Glass, senior planner with CGL. The public side — which will bring the city police department, county law enforcement, and even some highway patrol and homeland security functions all under one roof — will feature a welcoming environment with more standard materials. Meanwhile, the jail side will include durable, institutional materials and finishes.

“On the interior of the facility we have a mix of precast walls, mostly in the detention area, some masonry walls and then drywall partitions in the law enforcement center,” said Project Manager for Construction Engineers Ben Matson. The jail cells themselves are grouted steel wall panel modular cells from Habersham Metal Products of Cornelia, Ga.

As a local firm, Construction Engineers understood the necessity of working quickly to enclose the building before the beginning of the brutal winter months. To expedite the project, the company split it into four packages, allowing civil work to begin quickly. “From there we moved into structural, precast and steel,” Matson said. “We spent a lot of time making everything fit into our schedule.”

While a concerted effort was being made to beat the season, the county was also experiencing an unanticipated challenge: A sharp drop in oil prices resulting in a drop in overall county revenue. Midway through design, county officials requested that the team cut roughly $1 million out of the project budget.

“We really had to work closely with the design team to figure out how to get this done and not dramatically change what was planned because we were already in the ground,” Matson recalled. In the end, the team cut roughly $1.6 million by eliminating some products and masonry and using drywall in appropriate areas. Changes were also made to building height and circulation areas, and the team found efficiencies in electrical and mechanical products.