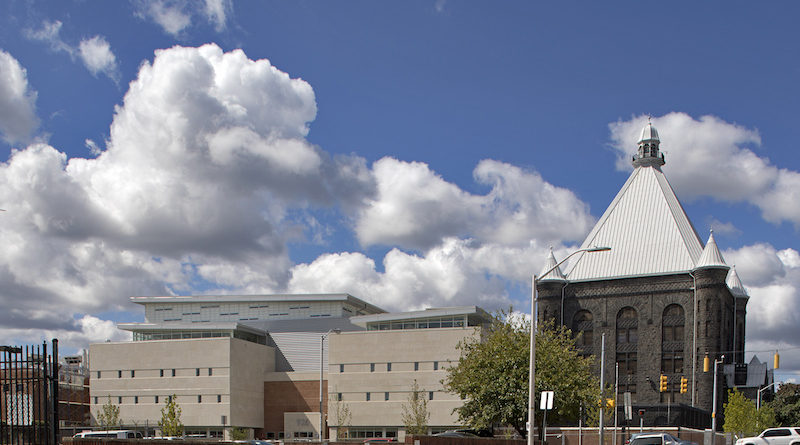 The project was a joint venture between Penza Bailey Architects in Baltimore, and Dewberry Architects in Fairfax, Va. CAM Construction in Baltimore served as the general contractor. The 61,000-square-foot building — in addition to approximately 4,000 square feet of attached recreational space — had a budget of $35 million, which included all furnishings, equipment and IT for the facility. Construction on the new facility began in June 2015. The design process of the facility started as far back as 2008, due to a long planning approval process required by the state of Maryland, according to Dan Bailey, principal and president at Penza Bailey architects.

The facility also includes medical and mental health geared toward the specific needs of a youth population, with a medical infirmary, full dental clinic, exam rooms, isolation rooms, psychology and behavioral health services and dialysis, according to Laurie Dickeson, senior associate at Penza Bailey and project manager for the youth detention center.

The new facility includes a school operated by Baltimore City Public Schools. The school is separate from the housing units to increase a sense of normalization, according to Bailey. The school includes a full administrative staff as well as school counselors, special education teachers and all of the features found in a traditional public school, all designed to increase the chances for success of the detainees upon release. The school has six general classrooms, which allow for small class size in addition to separate classrooms for art, science and computers. Additionally, there is a media center/library at the center and a full gymnasium for physical education as well as recreation available to students detained at the center.

“What we have really valued in this project and what we have tried to work towards is the idea of an improved environment that is normalized as possible for these detainees, and how that can affect and improve the lives of those living in there,” said Dickeson. “It is significant the positive impact that a carefully designed space can provide.”

To that effect, the design of the facility includes dayrooms with high windows to let light in with views of the sky, and the school looks and feels like ‘a regular public school,’ according to Dickeson. Additionally, the facility is designed to achieve LEED Gold certification, expected by the end of the year or possibly early in 2018. A few of the integrated sustainable features include the urban site selection and site density, reduction of water usage, a highly efficient building envelope, high-performance HVAC systems, efficient LED lighting throughout the facility and high use of recycled or readily renewable materials and finishes.

“It was important for the architectural team to have a close collaborative relationship with Department of Public Safety and Correctional Services, especially its Director of the Division of Capital Construction and Facilities Maintenance Katherine Z. Dixon, AIA, and with Baltimore City Public Schools to make this project happen,” said Bailey. “With many budget restrictions, the state worked very closely with us, while also giving us the freedom to pull together and develop a facility that we hope will change the face of youth detention in particular, and corrections overall.”