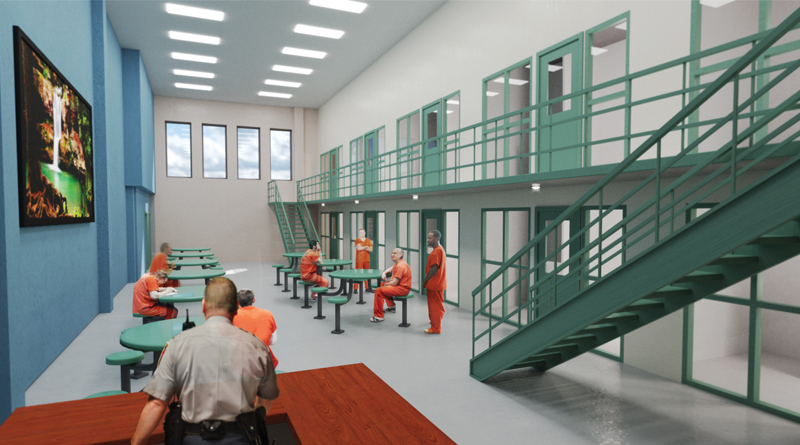 Like a lot of counties in rural Appalachia, Ross County, Ohio has been hit hard by the opioid epidemic. In a 2016 article, the Washington Post stated that 40 overdose deaths were reported in the small county in 2015 — nearly all from opioid abuse. Of those 40 deaths, 26 were men and 14 were women, ranging in age from 23 to 69 years old. With a local epidemic of these proportions comes an increased incidence of prosecution, incarceration and treatment. Critical conversations were needed to address the growing problem.

Ross County realized the issues and that the profile of inmates within the jail was changing. That’s why in 2016 the county began the process to plan an upgrade for the facility. Jim Caldwell, former county commissioner and then-president of the commissioners, pushed to have the formal needs assessment and long-range master plan done first before design work could even begin. Ross County selected HDR to research the current jail population and to determine what was needed to meet the changing needs of those inmates. HDR is currently working with the county to help create solutions and is overseeing the planning and development of the renovation and expansion of the Ross County-Chillicothe Law Enforcement Center, which is slated for completion in October 2018.

Before the design team started, we needed to know who was in the jail so we could develop an operations plan, followed by a design that was responsive to serve the needs of the people inside. Opioid addiction affects both men and women and all age groups, and what we have found in areas with high opioid abuse is that women make up a larger percentage of the jail population compared to national averages. In Ross County, 30 percent of the jail population is women compared to the national rate of 15 percent. Following this analysis, it became clear that an updated facility was needed. Our plan was to add less-expensive male beds in a direct-supervision pod and then backfill existing smaller housing units with females.

The project, which is being done in conjunction with DLZ of Columbus, Ohio, and delivered via the design-bid-build (D-B-B) method, will add years to the life of the 30-plus-year-old downtown jail. The renovation will not only add capacity, it will also enhance classification options, expand medical care and incorporate upgraded building systems. On this project, the county chose a D-B-B approach that allowed us to put together an a la carte menu of renovations and upgrades, from which the county could choose, while keeping an eye on their budget.

Our master plan identified that the existing clinic and one-bed infirmary was no longer adequate for the larger female population and the older jail population housed in the jail. By taking advantage of the existing space in the 3,000-square-foot outdoor recreation area, a new clinic and 12-bed infirmary was created and housed in this space. The expanded infirmary will separate inmates who require frequent skilled nursing and health care monitoring, from the general population. Skilled nursing services offered in the infirmary include convalescent care, acute care and chronic care, requiring in-patient treatment protocols. For inmates with substance-abuse issues, medical staff will work in areas where they can provide screening and evaluations, treatment planning and will detox inmates who manifest symptoms of intoxication or detoxification from alcohol, opiates or other drugs.