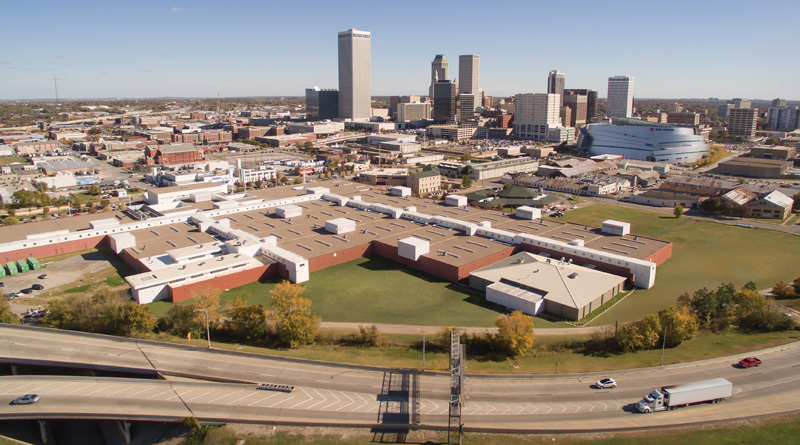 As mental health treatment continues to be a growing concern at correctional facilities across the country, different facilities are testing out different designs and methods for treatment. One such facility is Oklahoma’s Tulsa County Jail, which officially opened a 42,750-square-foot expansion last April.

The main goal of the project was two-fold: to increase the previous jail capacity of about 1,700 while also creating dedicated housing pods for inmates who suffer from mental illness. The project included 160 general population beds for lower-security inmates, designed to someday function as a work-release program. Then, the two pods for mental health were designed to house up to 98 inmates with varying degrees of mental health issues. The Tulsa office of Dewberry served as the architect on the project, with locally headquartered Manhattan Construction Company as the construction manager at-risk.

“We started to realize that the issue we found was that inmates who had mental illness spend four times longer in jail than those without it, and those with severe mental illness, even more so,” Robinette said.

The original jail was built in the 1990s and was considered very modern at the time, incorporating a direct-supervision model and an infirmary into the design. But while the jail’s segregation model was by no means a dungeon, neither was it conducive to accommodating someone with mental illness, Robinette added.

“Our goal for mental health was simple, but important,” said D. Bruce Henley, AIA, business unit manager, principal at Dewberry. “That was to reduce the stress within that population of inmates, provide some behavioral incentives, provide management models that were already out in the world but perfected to fit this jail, and then provide care beyond any infirmary-type space in any jail.”

The two-unit, mental health portion of the project includes one unit that houses three levels of step-up processing, from close watch to isolation to segregation. The other portion features a mental health transitional housing dorm for inmates preparing for transitioning back into general population housing.

Before the addition, the jail had a medical health services provider that provided psychiatrists and psychologists to give evaluations, but they weren’t stationed in the housing units. Instead, inmates had to be taken across the large jail campus to seek professional help. And while there was a discharge program in place, it was nothing like the transition model that’s set up in the new expansion.

“The client wanted mental health care expertise to be available immediately to this area of the jail, to avoid taking someone across the jail to get them in an environment where they could help settle them down,” Henley said.

The design of the mental health pods was very-much intentional in helping with the flow of the various levels in the four-step process. Step 1 is called “continuous watch” or “close watch.” This group of six cells is dedicated to inmates who are acutely suicidal and need 24-7 engagement by staff to make sure the inmates don’t harm themselves. When the inmates become more lucid and can deal more with reality, they move into the behavioral step process and go into isolation in one of the 10 beds dedicated as part of Step 2. Here, inmates are still watched closely in a confined environment.

“These are the inmates who can’t control their behavior,” Robinette said. “They’re so mentally incapacitated; these are the guys who poop and smear it on the wall or choose not to participate in life.”

In Step 3, the inmates staying in these dedicated 10 beds are becoming pretty coherent and are beginning to operate and get the choice of whether or not to mix with other people. They are confined by a glass wall that allows them to see the progress of other inmates. “These inmates take their time,” Henley said. “They can have time outside, dayroom time and just have a little more liberty.”

Finally, Step 4 is what the project team calls the “left side” of the group. This about 80-bed pod is similar to a general population pod, but it only houses mental health inmates. Here, they begin to have normal social interaction with other people, but they are still in somewhat of a protective environment. It gives them the opportunity to adjust, and the tenure there is a year or less.

“Given their attitude and their willingness, then they’re allowed to move back into the general population,” Henley said. “[The county] is finding that more inmates are liking that semi-separated environment of Step 4. It’s set up as a dorm style, so they have freedom to come and go to the dayroom and outdoor area.”

This more intense path of the mental health unit is beneficial to inmates because most of the mental health staff is right there in that unit. While the inmates stay behind protected walls, any staff that needs to administer medications is in the pod, so inmates don’t ever have to leave that pod and go across the jail, according to Henley.

“They get the same programs that the general population gets: classes, religious services, anything we can bring into the pod,” added Robinette. “The difference is that the mental health staff is right there in the unit, and they’re connected with their mental health providers outside, so there’s no break [in treatment].”

The discharge planning is also way more intense than it used to be, according to Robinette. Connections are made prior to them leaving. And if the therapist wants to do group counseling, they’re called out and meet there in the unit. The county has tried to introduce as many interaction and therapy sessions as possible while maintaining the jail setting.

“If they leave here, they can go straight to their connection outside of jail, so they don’t fall through the cracks, which was the problem in the past,” Robinette said. “We have 80-plus agencies to help divert them from even coming to jail, prior to being booked. The pods were just the first piece.”

Because Dewberry designs corrections facilities across the country, the mental health aspect came as no surprise to Henley. “Mental health in city and county jails seems to be almost epidemic in those facilities,” Henley said. “Every jail that I’m touching involves a discussion about mental illness and how to deal with these inmates.”

Even knowing people with mental illness, Henley admitted that he didn’t realize how big of an issue it was until he got engaged with this project. The key things that the design team emphasized in this project was daylighting, the proximity of support, the levels of support within and making it so that inmates did not have to be moved far to receive treatment. “This four-step process (and you can even say five if you count the step going back into general population) is a new twist,” Henley said. “We went a long way to introduce natural light into these pods.”

One of the things that truly brightened up the facility was creating vision within the space. In fact, the design lowers the inmate cell areas and raises the center portion to not only provide a protective seal, but to also create a clerestory, which brings in daylight as well as helps control sound levels. Henley compared it to the idea of daydreaming and looking out a window at the sky and the top of trees.

“In that sense from an aesthetic standpoint, we’ve created an environment that brings you in touch with a reality outside of your immediate circumstance,” Henley said. “From the standpoint that there’s a bigger world and a bigger reality, we’ve done that well.”

The mental health housing pods needed to be different than the normal pods, according to Robinette. That meant including a lot of natural light, softer baby blue hues and keeping everything on one main level.

“[The mental health portion] is working as planned, and it’s working really well,” Robinette said. “It’s made a huge difference — the openness, the natural light, the blue color of the walls that has a huge affect on the mental psyche — those kinds of things were not optional.”