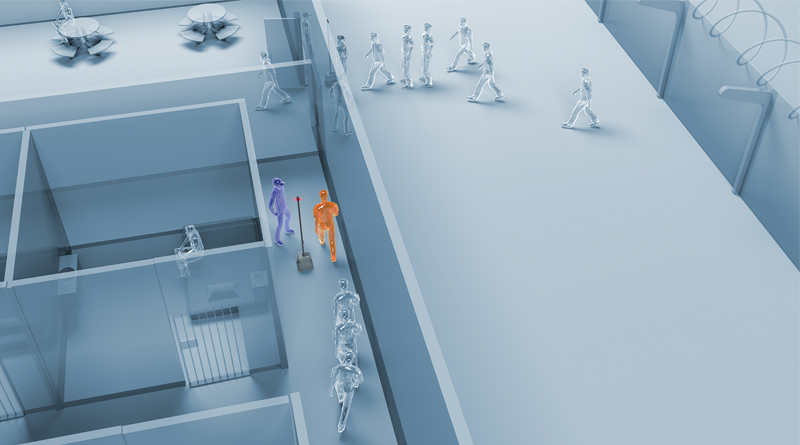 Portable solutions, as is the case with FMDS, are easily moved and deployed to conduct surprise screenings that are difficult to plan around.

At the heart of any correctional institution’s contraband-detection strategy exists technology coupled with talent, working together to create solutions. Most conventional technologies that have been adopted successfully in corrections have been built around security gaps or obstacles: The walk-through metal detector, hand-held metal detector, X-ray machine and body scanner have all become established ways to solve contraband problems in correctional institutions. Each technology layered with the next creates a holistic solution to enhance security and safety.

With the use of these and other technologies, it is safe to say that staying on top of technology development is important. While technology does not develop as rapidly for corrections as it does for consumer electronics, the technology that is deployed is often essential and meets a very real need. And while these technologies have allowed the industry to take great strides, there are still gaps that new technology can fill — which brings us to the current needs for contraband detection.

Contraband has been an issue in corrections for ages. Practices, procedures, staff and technology have all been deployed in some manner to combat the contraband enterprise. Walk-through metal detectors, for example, have been a staple for main entrance deployment at facilities to stop contraband from walking in the front door. As walk-through metal detectors began putting a dent in items passing through the entrance, the contraband entry points started to evolve. Contraband began entering almost literally through every crevice in a facility’s exterior shell — over the wall, in food and commissary deliveries, through staff and civilian contractors, and more. And not only was it entering in new ways, but it was being concealed better. That includes within laundry items, in personal items such as books and internalized within body cavities. In response, the technology expanded and machines such as X-rays and body scanners were put into use. Now inmates suspected of possessing concealed or internalized contraband could be sent for an X-ray or scan to confirm.

However, even with all of these technologies currently in place, there is still a contraband problem in most correctional facilities, which means that a detection technology is still missing in the industry. This thinking is due in large part to the fact that the primary technologies we think of have been designed for traditional entrances and fixed-point screening and, as such, have inherit disadvantages for anything other than these screening methods. Therefore, you must ask the key question: How do we use better technology to get the contraband out once it has been introduced to the inmate population? In addition to long-term and ongoing efforts to stop contraband from getting in, it makes sense that we must devote equal attention and effort to getting contraband out with better technology.

New technology ushered in a few years ago performed unlike other detection technologies before it. This technology, known as ferromagnetic detection technology systems, or FMDS, was designed with the intent to aid in the detection of contraband in a manner conducive to screening large populations of inmates effectively and efficiently. FMDS has its commercial roots in the medical field, originally developed by Lisle, Ill.-based Metrasens for use in keeping ferrous metals away from MRI magnets to avoid serious patient injury. Over time, Metrasens developed FMDS for other industries and use cases, including contraband detection for corrections. Metrasens, a leader in this advanced magnetic-detection technology, decided to match FMDS with the corrections industry need and made contraband detection stronger from the inside out.

The technology from Metrasens is designed for contraband detection behind the wall. It is based on contraband items having magnetic properties — ferrous metals that are made from iron or steel. The key here is the ability to detect very small items, down to the size of a staple. The pure presence of metal, whether in the form of staples, drill bits, razor blades or cell phones, facilitates the confiscation of contraband. The principles of the technology are different than most other products available, and thus demonstrate a unique capacity to detect contraband within an inmate population.

One thing that inmates excel at is monitoring how officers watch other inmates. They note standard procedures, rituals and behaviors. Inmates have more options for planned avoidance with any type of fixed system. Portable solutions, as is the case with FMDS, are easily moved and deployed to conduct surprise screenings that are difficult to plan around. The specific operations are subject to individual facility needs, but nonetheless focus on the importance of portability. A Cellsense Plus system from Metrasens, for example, weighs in at 20 pounds and can easily be moved around facility grounds with a setup time of 10 seconds. Portability in this sense means bringing the system to the inmates, and inmates never quite knowing when they will face screening.

While screening inmates is paramount, it is increasingly important to think beyond the person and about their belongings as well. Metrasens spends significant time training officers on techniques for screening mattresses, laundry bags and other personal belongings because items are often concealed in these places. As a matter of fact, it is increasingly common to find razor blades, sewing needles and tattoo needles in mattresses, as opposed to on the person. FMDS technology effectively ignores any attempt to conceal contraband, in essence positively detecting ferrous metals in inmates’ items and materials.

FMDS technology has been deployed successfully in jails and prisons around the world to add a layer of detection capability that is fit for operations behind the wall. For Metrasens, the adoption rate is growing, with implementation across 37 state departments of corrections, nearly 200 counties and 40 countries. Most recently, in the U.S., Maryland Department of Public Safety and Correctional Services deployed Metrasens’ Cellsense Plus across all state correctional facilities — a total deployment of 163 systems to precisely address contraband detection behind the wall more effectively. Outside of the U.S., Metrasens has deployed this technology across all Indonesian national police facilities. This growing adoption rate supports the case for change, and the reward in thinking beyond the status quo to find new solutions to contraband problems.