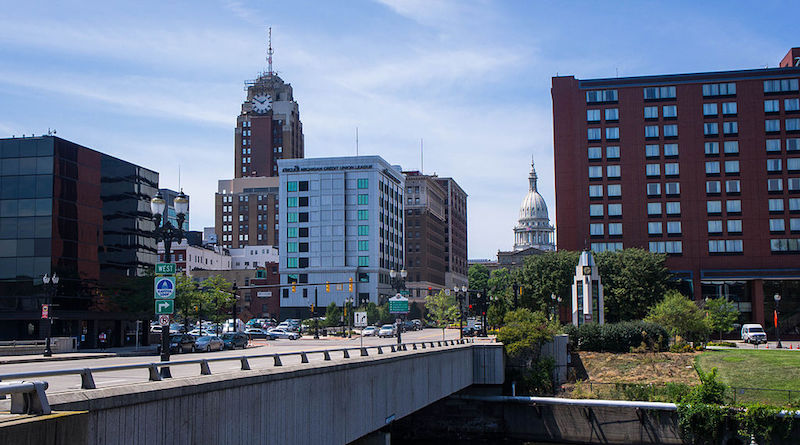 The Michigan Department of Corrections (DOC), based in Lansing (pictured here), is making impressive strides in the world of corrections and recidivism. Photo Credit (all): Wikimedia Commons

LANSING, Mich. — The Michigan Department of Corrections (DOC), based in Lansing, is making impressive strides in the world of corrections and recidivism. The programs and training that the DOC has put in place in recent years has put the recidivism rate in Michigan prisons among the lowest in the nation.

Michigan records its recidivism rates in three-year blocks, and this most recent reported figure represents individuals who were released from prison in 2014, which measures the percentage of offenders who return to prison within three years of release. (Though, offenders can be returned to prison for committing new crimes or for violating the conditions of their parole.) This most recent figure places Michigan among the top 10 states in the nation with the lowest recidivism rates.

Last year, when the DOC announced recidivism rates had dropped to 29.8 percent, it was the second-lowest level since the state began recording the three-year rates. Recidivism in Michigan has hovered around 30 percent in recent years, and has proven a sharp decline from 1998 when the rate was a significantly higher at 45.7 percent.

The state’s previously lowest recidivism rate came in 2014 when only 29 percent of offenders were returned to prison following their release in 2010.

Michigan’s impressive position in the area of recidivism is speculated to be as a result of important programs and training that the state has put in place with just such goals in mind. The department’s “Offender Success” model provides inmates with education, skills and job training in high-demand fields that can lead to stable careers and lower the risk of re-offense.

“Our communities are safer when we give offenders the tools they need to become successful and productive members of society,” said Heidi Washington, director of the Michigan Department of Corrections. “The department has made it a priority to provide high-quality education, training and support to offenders returning to our neighborhoods, and Michigan’s declining recidivism rates show these efforts are working.”

Some examples of the new DOC training programs include the Vocational Village, which operates at the Richard A. Handlon Correctional Facility in Ionia (since 2016) and one that opened shortly thereafter at the Parnall Correctional Facility in Jackson. The two programs offer training and education in areas of robotics, automotive technology, CNC machining, welding, commercial truck driving,carpentry, forklift operation, plumbing, electrical trades and concrete and masonry work.

“Ninety-five percent of people in prison will be paroled, and 100 percent of them need a job,” said Rick Snyder, Michigan governor in the recent February statement. “Finding employment is the best deterrent in keeping former offenders from returning to prison. The Department of Corrections should be proud of the work it’s doing to help our returning residents to give them the chance that best helps them find a successful path in life.”

Michigan’s recent record-breaking recidivism rate is an important indicator that the Michigan DOC is meeting its mission to prepare prisoners to reenter the community as law-abiding citizens, according to Washington in a March 2017 statement.

“When we give offenders the skills they need to lead crime-free lives as productive members of society, it makes Michigan a safer place to live,” said Washington. “These figures show our efforts have been effective, and we look forward to building upon that success.”