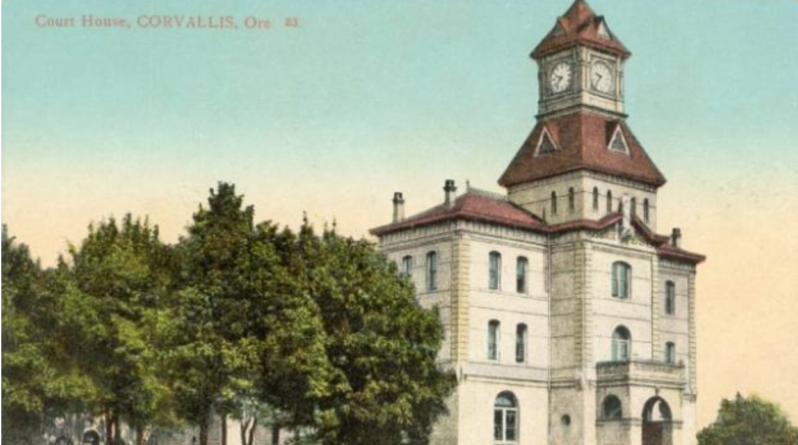 The Benton County courthouse, as depicted in this vintage postcard, was built in 1888. CGL will determine if it's still viable. Photo Credit: CourthouseHistory.com

CORVALLIS, Ore. — It’s not necessarily out with the old and in with the new — yet — when it comes to the existing criminal justice system in Benton County, Ore. In 2015, voters shot down a $25 million bond measure to build a new jail, which was followed by rumblings from county officials who began evaluating the entire local criminal justice system. This included determining whether or not to upgrade or replace an overcrowded jail and an historic courthouse facing obsolescence.

The formal launch of the evaluation process began in earnest last week with a kickoff event. Following upon the Board of Commissioners approval of $171,000 consulting contract last month, national corrections planning and design firm CGL (who won the contract) will prepare three recommendations for improvements in regard to maintaining and continuing operations of the existing criminal justice system. Each will include a cost-benefit analysis with a final report filed by the end of the year.

Overseeing the assessment is a 15-member Criminal Justice Steering Committee comprised of a few members of the community, county officials, judges and law enforcement representatives. Among them is Commission Chair Xan Augerot who advocated for a transparent process. On the Board of Commissioners Office page on Benton County’s website, Augerot’s statement reads: “The county will consult with the community and consider potential outcomes within the context of prevalent social factors, such as housing, health, access to social services and development.”

Critics have pointed out that the steering committee was largely comprised of justice system professionals, whilst victims of crime and inmates, for example, were not represented on the committee. The objectivity of CGL in assessing the county’s needs was also questioned since the company is involved in the architecture side of the business as well. A senior vice president with CGL, Karl Becker, pointed out that, while his company designs correctional facilities, it also has wide experience in objectively analyzing the needs of community justice systems, reported the Corvallis Gazette-Times.

Characterized as a “systems review” rather than a facilities or jail study, Becker explained that the assessment will be a fourfold process starting with detailed documentation of the system that is presently in place. Additional community meetings will be conducted and further public comment will be sought as the process continues.