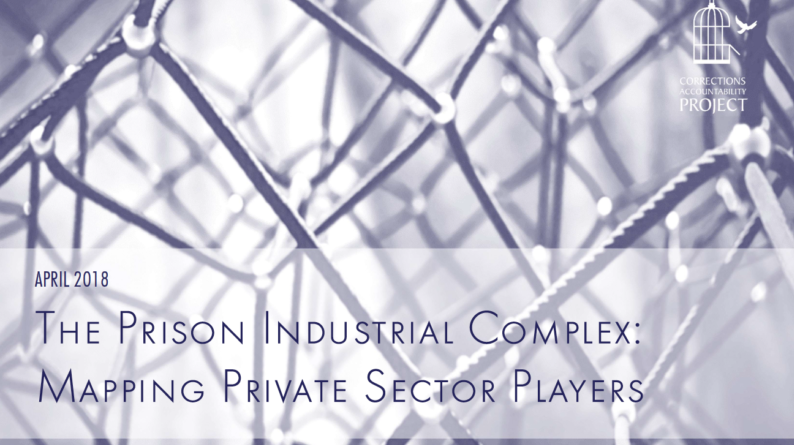 NEW YORK — Sure, CoreCivic and The GEO Group are the biggest players in the private prison industry — but as they say in late night TV commercials — “But wait, there’s more…”

A new report from the Corrections Accountability Project at the Urban Justice Center, “The Prison Industrial Complex: Mapping Private Sector Players,” identifies more than 3,100 companies that earn revenue through contracts with private prison players in the United States. For some, this will be old news; for others, however, who are set on cultivating awareness of social justice issues, the 113-page report will prove illuminating.

According to its site, the center’s report “…Exposes over 3,100 corporations across 12 sectors that profit from the devastating mass incarceration of our nation’s marginalized communities. It aggregates critical information about these corporations to help advocates, litigators, journalists, investors and the public fight the commercialization of justice.”

Among the business sectors examined are those in construction and healthcare as well as telecom companies that may — or may not — know that they are involved in privatized prisons. What’s at stake for the New York-based Urban Justice Center, a non-profit social justice organization incubator that serves under-resourced communities is that the private prison industry disproportionately incarcerates African-American, Latin and Native people, according to its Corrections Accountability Project. The organization uses the hashtag #DecommercializeJustice in its social media messaging where the report has garnered traction on services such as Twitter.

“With this report we seek to convey the enormity of the prison industrial complex and shed light on its diverse corporate participants, taking our understanding of the commercialization of justice beyond just private prison giants, CoreCivic and The GEO Group. There are thousands of publicly-traded, private equity-owned, and privately-held companies that generate profits through the criminal legal system on the backs of those it targets: low-income and minority communities,” said Corrections Accountability Project Director Bianca Tylek in an emailed statement. “Until today, these companies have operated largely behind closed doors, often intentionally masking their involvement. Yet given the reach of the criminal legal system today, still others, have found themselves unintentionally wrapped up in the prison industrial complex. Nevertheless, both present an engagement opportunity for advocates fighting to shut down the industry and shift the economy that has been built around mass incarceration.”

The businesses listed in the report represent the full spectrum of American enterprise, from publicly traded companies to small privately-owned ventures.

“Today, more than half of the $80 billion spent on incarceration annually in the U.S. is used to pay the thousands of vendors that serve the criminal legal system,” state the report’s authors in the introduction.