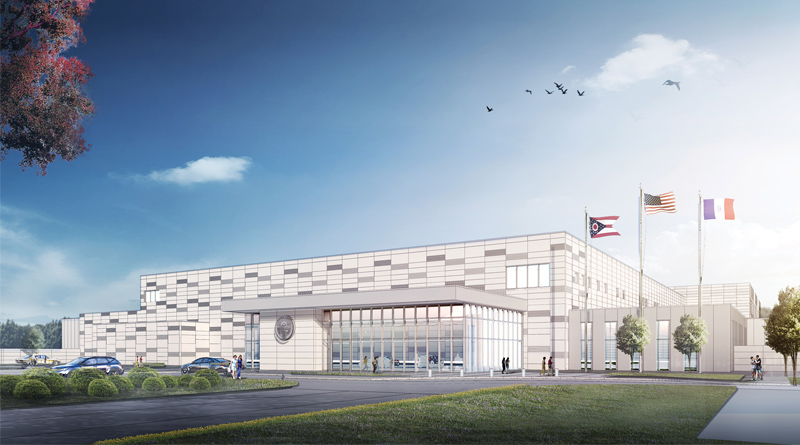 COLUMBUS, Ohio — Construction is currently underway on the new Franklin County Corrections Center in Columbus. The project broke ground on Nov. 6, 2017 and has a projected construction schedule of 24 to 30 months. Partial completion is expected by December 2019 and full completion in 2020.

HDR — based out of its Chicago office — is the consulting justice architect on the project, and has teamed up with locally based DLZ architects. Construction management of the new corrections center is a joint venture between the Chicago-based Gilbane Building Company and Smoot Construction, also local to Columbus.

Franklin County currently has two facilities: a downtown facility that was constructed in the late 1960s and houses 800 inmates, and a second facility, dubbed “Jackson Pike,” that was built in the 1990s. The latter is a “linear intermittent supervision facility,” according to David Bostwick, justice principal at HDR.

“Jackson Pike is mostly dormitory-type spaces, and currently, between the two facilities, the county houses higher-security and special needs inmates at the downtown facility where they have single-occupancy cells, with the general population by and large held at the Jackson Pike facility,” said Bostwick. “Given the shortcomings of the two existing facilities, which do not meet the needs of the population, the goal of the new corrections center for Franklin County is to create a single facility that will also serve as a model jail facility for the rest of the country. Our aspirations for this facility are quite high.”

The county plans to build the new jail in two phases; the first phase will have all of the core infrastructure with the future potential to accommodate 3,000 beds. Once Phase I is complete, the county plans to shut down the existing downtown facility.

Phase II will provide general population housing and, upon completion, will bring the total capacity of the building to approximately 2,400 beds, thus enabling the county to close the Jackson Pike facility.

The 429,500-square-foot facility is located on a 24-acre site. Phase I of the jail construction will include 16 individual housing units (or pods) for a total of 870 beds, with 34 to 68 beds per unit as a general rule. The facility is tracking towards LEED Gold certification.

The new corrections center has been designed specifically to use a new objective classification system that will allow staff to sort inmates based on their risk and by the services they may require. Currently, inmates are housed based on the nature of the crime for which they are charged, which “isn’t always the best classification system,” according to Dallas Baldwin, sheriff of Franklin County.

In an effort to mitigate the issue, housing units in the new corrections center will include separate specialized units for inmates, broken into the categories of orientation, mental health, behavioral, medical and maximum security. The medical unit will have 70 male beds and 24 beds for females. The mental health unit (acute and non-acute) will have 116 beds for males and 40 beds for females.

“The facility is going to have a robust mental health and medical component,” said Bostwick. “In terms of mental health, we have different types of housing for folks with mental health issues that are made of single-occupancy cells. We designed it so that we have a mental health professional right there in the pods or adjacent to the pods. That was important because when someone is in crisis, they need more supervision and more access to professional services.”

Providing treatment and programming to the inmates is one of the ways Franklin County hopes to rehabilitate its inmates, and the new jail will allow for expanded programming. In an effort to help achieve this, programs, services and meeting rooms will be located inside the housing units — an effort intended to improve inmate services and staff experience overall.

In addition, the new Franklin County Corrections Center will incorporate a direct supervision model, with the hopes of leading to better behavior outcomes and reduced recidivism. The jail will employ both podular remote supervision as well as direct supervision, according to Bostwick.

Special needs, acute medical and restrictive custody housing will be pod remote, with an officer stationed inside the pod. For the general population, direct supervision will be used with a staff person inside the housing unit with the inmates, including maximum, medium and minimum classifications.