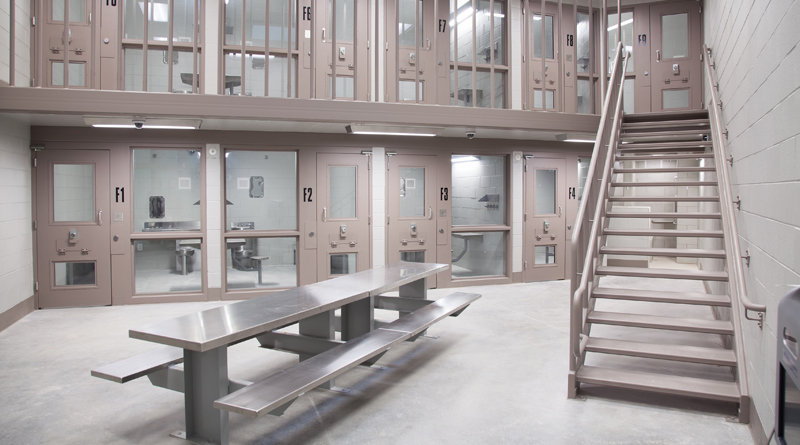 The new facility incorporates a pod model, which affords continuous observation of inmates by staff via multiple clusters of cells that surround a living area. Photo Credit (all): Chris Moe Photography

The original half-century-old facility only had capacity for 32 beds and suffered from supervision issues due to the nature of its rectilinear design. The new 49,000-square-foot jail, however, boasts 158 beds as well as administrative offices and also serves as the new Wexford County sheriff’s office headquarters.

Designed by Hooker DeJong Architects of Muskegon, Mich., the new facility incorporates a pod model, which affords continuous observation of inmates by staff via multiple clusters of cells that surround a living area — or pod — that contain tables, chairs and televisions, and other amenities.

“It maximizes visual supervision of each housing block and eliminates blind spots as much as possible,” said Steve Moe, AIA, senior project manager at Hooker DeJong Architects. “The pods are sized for staff supervision efficiency. It is very compact so it maximizes the utilization of the space.”

Another consideration regarding space utilization was managing the flow of inmate and personnel traffic. By bringing programs and services to inmates — through video visitation, adequate dayroom space within each cell block, in/out activities and meals served within cell blocks rather than via a central dining facility — inmate movement and personnel traffic between the jail’s various locations have been enhanced. To that end, the pod system helps separate minimum-security inmates from inmates incarcerated for felonies, which greatly benefits inmate safety and correctional facility culture. Likewise, there are varying cell-block sizes, capacities and security levels to provide flexibility, depending on the needs of the population.

Corroborating the jail’s campus-like aesthetic, emphasis was also put on creating a classroom for inmates. To create a functioning learning environment within the facility, the team decided to design a dedicated classroom space rather than a multipurpose room. Not only does it honor the intention of the space, having a dedicated classroom also cuts down the time lost to rearrange it.

“A dedicated classroom, appropriately sized, was provided rather than sharing the room with other functions. Therefore, furniture and technology are always set up for the classroom environment, eliminating the need to rearrange,” said Moe, who added that the room has “good acoustics.”

Additionally, the new jail has improved health-related services with a full-time nurse on staff. A doctor will also pay weekly visits to the jail (versus the previous fortnightly schedule). Also, inmates’ personal effects are stored through a new conveyor system, which will be kept in a locked room. Speaking of storage, the new jail features a large building designed to stow patrol cars and marine patrol vehicles.

Another interesting highlight of the new design is the use of a mechanical chase behind all of the cells. “This chase falls outside of the secure perimeter and allows for all of the utilities to be run through. It also allows for all maintenance to plumbing fixtures and access to ductwork from this space,” explained Moe. “This eliminates the need for maintenance staff or repair people to access most things from within the cell blocks, reducing the need to move inmates or escort anyone while they are working on repairs or maintenance.”

Inmates also get plenty of daylight, which is directed in the cell blocks through skylights. Moreover, inmates are not brought outside for recreation — rather, “the recreation requirements are met with an in/out activity room where, on non-rainy days, an overhead door located in a clerestory can be opened to provide fresh air and a view to the sky,” said Moe.