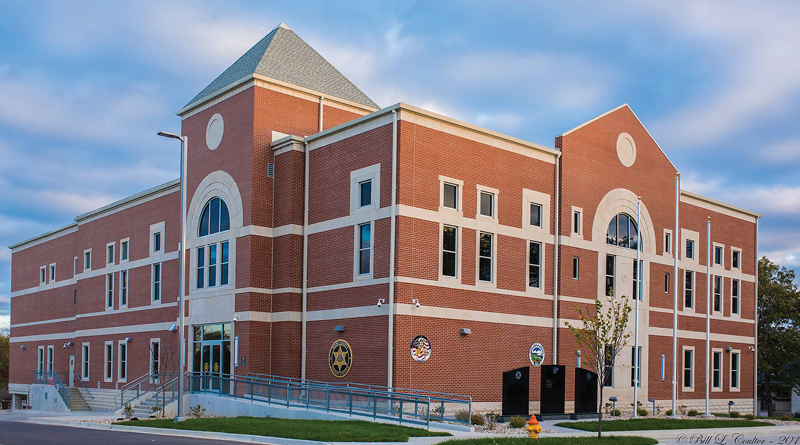 PAOLA, Kan. —  Construction on the Miami County Detention Center in Paola was completed in November 2017. The new detention center has a 911/dispatch center and a sheriff’s office. It is a significant improvement, expansion and upgrade to the old facility, which was built in 1967.

Goldberg Group Architects, PC (GGA) based out of St. Joseph, Mo., was the architect on the project, with Loyd Builders serving as the construction manager, based out of its Ottawa, Kan., office. Design on the 43,700-square-foot project started in spring 2015, with an overall budget of $18 million. The new facility is three stories high.

GGA first interviewed with Miami County back in 2006, but wasn’t hired as the project’s architect until eight years later, according to Lawrence Goldberg, president and senior principal at GGA. Although the exterior of the Miami County Detention Center “echoes the architecture of a bygone era,” according to Goldberg, much has changed in the interim in the world of technology and design as far as correctional facilities are concerned.

The goal of the project was to increase the capacity and efficiency of Miami County’s detention facilities as well as to provide space for related law enforcement services and have them housed all in one building, which is located in downtown Paola, according to Goldberg.

“What became apparent from the selection of this particular site was that the project exterior would need to blend with the red brick and the cast stone of the courthouse if the project was to be accepted by the community,” said Goldberg. “What the project came down to was either a low-rise pre-engineered building located out on the highway outside of Paola or a mid-rise solution situated next to the beautiful courthouse. When county officials selected the downtown Paola site, we knew we needed to develop a special exterior with historical materials, details and proportions.”

The detention center has 96 beds in the general population category — a vast improvement from the 24 to 26 beds of the previous jail. Additional housing is provided through special needs such as intake, medical and segregation, according to Goldberg. General population housing is arranged in a radial-podular layout around a single housing control, providing direct visual control into each of the eight housing pods. In addition, GGA paid attention to lighting, sound acoustics and creating aspects of privacy, such as showers in each individual cell, when designing the facility.

The new detention center has a medical space with its own observation cells as well as space for exams and for when detainees are ill. Right next to the medical space is what is referred to as “swing” pods, according to Goldberg. “The term ‘swing pods’ describes the design choice of building many smaller cells rather than larger ones in order to give greater flexibility to the facility in terms of how to use those pods,” said Goldberg. “If more sick beds are needed, they can be used for medical. If more observation cells are needed, then they can be used as such.”

In terms of mental health, some of the swing cells may be used as such, but often those aspects are taken care of during intake and booking in padded cells with direct visual control, according to Goldberg.

Each of the general population housing pods contain rear-chase modular steel cells, which allow for access behind the cells for maintenance of operating cell systems such as ductwork, plumbing and electrical by county building staff without having to enter the pods themselves when occupied.

The steel-chase also created about 4 to 5 feet of physical separation between the outside perimeter of the steel cells and the actual exterior walls of the building. This space and separation between the cells and exterior walls allowed the architectural team greater design latitude to create a unique, historical exterior that matched the nearby courthouse, according to Goldberg. Matching brick, stone bands and accents, carefully proportioned windows and decorative pediments were used to create a richer look and feel than would have otherwise been possible with more traditional masonry cell construction.

“Balancing all of the different construction components involved in successfully building a law enforcement project is challenging,” said Kevin Rost, senior architect at GGA. “But the array of detention equipment products we have access to are key to achieving an end result like the Miami County project. It just wouldn’t be possible without today’s modular steel cells with their pre-wiring, showers and rear-chase technology.”