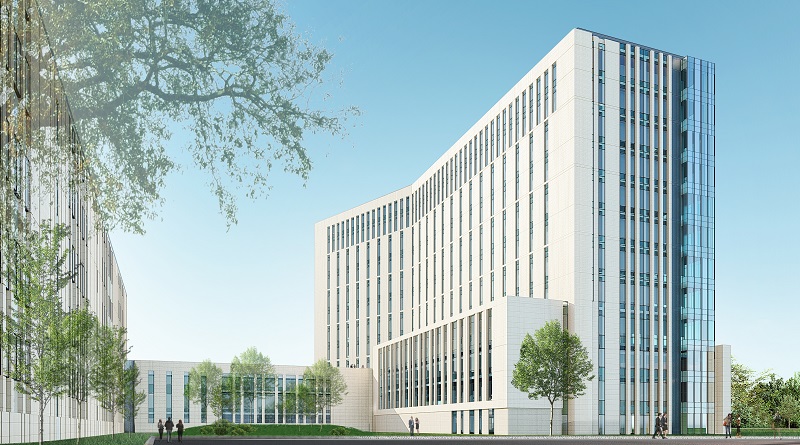 This rendering shows exterior views of the new justice center from the northeast. Photo Credit: City of Indianapolis

The criminal justice center comprises a jail, courthouse, sheriff’s office, and assessment and intervention center, and is focused on diverting people from jail and furnishing them with mental health services. The new facility is scheduled to be constructed on the site of the former Citizens Energy coke plant and completed in 2021, the Indianapolis Business Journal (IBJ) and other media outlets recently reported.

It’s  unusual  for  any  civic  project  to  garner sweeping  approval,  but  a  $571  million  justice  center  in  Indianapolis  has succeeded in uniting  both  sides  of  the  aisle  at  a  time  of  substantial partisan  gridlock.

In  December  2016,  Hogsett  officially  met  with  community  leaders  to  discuss  the  fuller  meaning  of  the  Marion  County  Criminal  Justice  Reform  Task  Force’s  recommendations  on  prompting the  county  and  city  of  Indianapolis  toward  expanding  justice  administration.  The  mayor’s  office  said  that  the  task  force’s  plans  entailed  the  new  facility  to  replace  a  much  older  edifice  in  downtown  Indianapolis.

National  architecture  firm  HOK  was  hired  to  design  the  11-story  project,  described as “timeless  and  not  trendy,” by the firm’s Senior  Vice  President  Jeff  Goodale.

Look for more details on this project in the July/August issue of Correctional News.