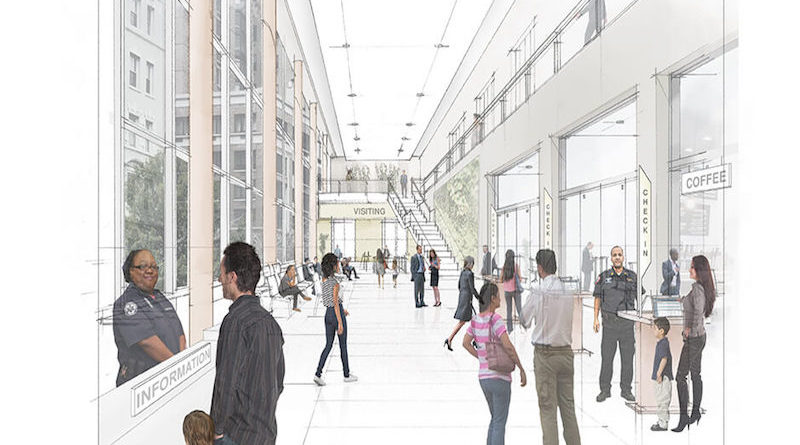 A rendering of the lobby in one of New York City’s proposed borough-based jails. Photo Credit: NYC Mayor’s Office of Criminal Justice.

NEW YORK — The City of New York has plans to replace detention facilities at Rikers Island with four modern, community-based jails throughout the city.

Mayor Bill de Blasio and his administration unveiled plans for the community facilities that are expected to be fully integrated into the surrounding neighborhoods with community space, ground-floor retail and parking. The planned facilities will also provide a safer environment to work and will allow inmates to remain closer to their loved ones, as well as offer quality health, education, visitation and recreational services that will help people reintegrate once they return to their communities.

“We’re taking a big step forward in the process of closing Rikers Island and creating a modern community-based jail system that is smaller, safer and fairer,” said de Blasio. “Now we can move full steam ahead on the engagement and planning for our new facilities so we can close Rikers as fast as possible.”

The four sites under consideration for the community-based jails are 320 Concord Avenue in the Bronx, 275 Atlantic Avenue in Brooklyn, 80 Centre Street in Manhattan and 126-02 82nd Avenue in Queens.

Each facility will contain approximately 1,500 beds in order for the city to meet the needed 6,000 beds to accommodate an average daily population of 5,000 people, while allowing space for population-specific housing requirements, such as those related to safety, security, health, and mental health, among other factors, as well as normal fluctuations in the jail population. Currently, existing borough-based facilities only have the combined operational capacity to house approximately 2,400 people.

The plans feature hundreds of parking spaces, community space and ground floor retail as well as on-site support services. The proposal for the Bronx envisions rezoning the western portion of the site to facilitate the development of a residential building with potentially more than 200-units and ground floor retail.

The project is still in early stages as the proposal will need to go through a public review – the Uniform Land Use Review Procedure (ULURP) — which includes hearings and recommendations by the local community board, borough president, the City Council and the City Planning Commission.

Progress on these strategies is underway with the partnership of New Yorkers, the City Council, the courts, district attorneys, defenders, service providers, and others within the justice system. When New York City released its roadmap in June 2017, the City’s jails held an average of 9,400 people on any given day. One year later, the jail population has dropped by almost 13 percent to around 8,200, the lowest level in more than three decades.

De Blasio announced plans to close the jails on Rikers Island in 2017 and released a roadmap for a smaller, safer and fairer justice system. The roadmap included plans to safely reduce the jail population to 5,000 people and transition to a local borough-based jail system.

“Closing Rikers and moving into newer, community-based facilities comes down to one thing – and that’s safety,” said DOC Commissioner Cynthia Brann. “These new jails will have improved interior layouts allowing officers more effective ways to supervise people in detention, and also provide space for quality education, health, and therapeutic programming. As we move forward with this transition, I want the men and women who are currently working on Rikers Island to know that the safer, state-of-the-art facilities you deserve are on the way.”