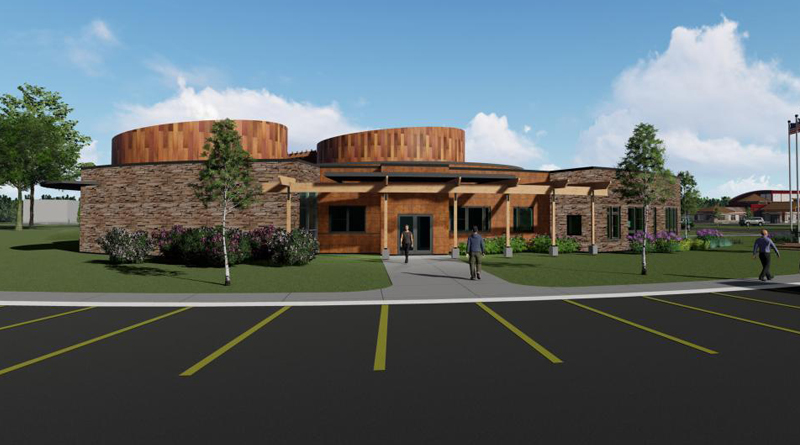 DOWAGIAC, Mich. — The Pokagon Band of Potawatomi is building a new justice center that focuses on the spirit and ideals of native justice.

Seven Generations Architecture & Engineering was commissioned by the Pokagon Band of Potawatomi to design a cutting-edge native justice center on its Rogers Lake campus to serve the Pokagon Band tribal members.

The Band is also partnering with Michigan-based architecture and engineering firm Wightman & Associates, Inc. and CSM for the justice center project slated for completion in late 2019.

“Seven Generations strives to provide unique solutions to a unique client base,” said Steve VandenBussche, director of architecture for Seven Generations Architecture & Engineering. “Our passion is to work with tribal communities all over the country.”

The justice center will house the Band’s tribal court and the headquarters for its tribal police department, and feature interior and exterior designs more culturally appropriate for traditional peacemaking and native justice proceedings.

The mission of the Band’s tribal judiciary is to provide fully functioning judicial forums for all matters heard by the courts of the tribe built upon tribal laws, values, culture and traditions that provide fairness and due process in resolving conflicts and disputes within its jurisdiction. The courts are currently staffed by the court administrator, clerk of the courts and court clerk.

The Pokagon Band Police Department has been serving its citizens and visitors since 2003, and it continues to assist agencies in the tribe’s geographic boundaries within its ten-county service area of Michigan and Indiana, as well as the Federal Bureau of Investigation. A tribal officer can expect to be involved in everything from conservation and gaming law, to violent crime responses and investigations.

The peacemaking room will have a fire pit as the main focal point. Both of the large spaces will focus on cultural aspects of justice compared to traditionally western judiciary practices.

The Herald-Palladium reports that the $25 million project also includes an addition to the Band’s health services building and new water lines.

Tribal Government Manager Jason Wesaw said to the Herald-Palladium that ground was broken for the new justice center in August. The new 23,000-square-foot facility is reportedly more than ten times the size of the current tribal court building and will have a clear line of separation between the police and court divisions, including separate entrances for safety. The court division of the building will reportedly include a courtroom as well as space and offices for judges, lawyers and administration.

Wesaw reportedly said the tribal police services for the Dowagiac area are set to move from the tribe’s current offices on M-51 south of Dowagiac, while tribal police offices in Hartford, New Buffalo and South Bend will reportedly stay in their current locations.

“The Dowagiac justice center will be unique as it will be a law enforcement building on tribal sovereign land,” said Wesaw to the Herald-Palladium. “It will also give us better space for what we’re doing.”

A report from the Herald-Palladium contributed to this story.