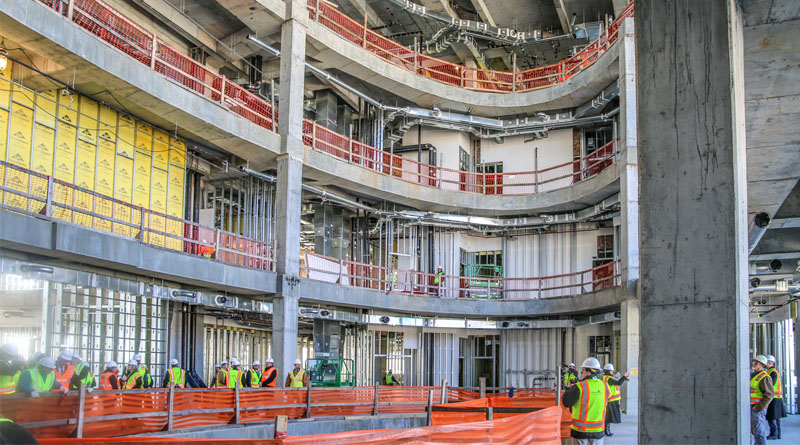 ATLANTA — A topping-out ceremony was recently held for the state’s new $127 million judicial complex that will hold two appellate courts and is current 50 percent complete.

According to the Daily Report, the event is traditionally used as a time to celebrate contractors and the construction crew, and was canceled twice the week before Thanksgiving.

The six-story, 210,000-square-foot judicial complex will house the Georgia Supreme Court and Court of Appeals in the city of Atlanta, and was designed by Stevens & Wilkinson, a full-service architecture, engineering and interior design firm based in Atlanta and Columbia, S.C.

The building will sit two blocks south of the capitol building, on a six-acre site just south of Interstate 85 where the long-unoccupied Georgia State Archives has been demolished to create space. Construction, led by general contractor Gilbane Building Company, is scheduled for completion by late 2019 with occupancy slated for early 2020.

“Atlanta has a rich history of classical design. Aesthetically, we’ve taken cues from the state capital building itself, and the desire of the judges and justices to be respectful of that history and the many wonderful buildings near the capital,” said Bill Clark, AIA, LEED AP, principal at Stevens & Wilkinson, Atlanta.

The building’s neo-classical exterior relates the historic look of the Georgia State Capital, the John C. Godbold Federal Building/Elbert P. Tuttle U.S. Court of Appeals, and other historic state and federal buildings that define the architectural identity of downtown Atlanta. A curving, layered facade of Georgia granite and precast concrete is foregrounded by grand columns announcing the entrance. White Cherokee marble recycled from the Georgia State Archives building accents the exterior hardscape, and inside, a naturally lit public atrium, spanning all floors, provides an uninterrupted view of the Georgia State Capitol.

The design balances long-term functionality and aesthetic grace, with a desire for cost containment.

“One of our goals for the project involves being good stewards of taxpayers’ money, while providing many elegant public features and elements for the complex,” said Clark. “This building may be the most important building in Georgia this century; the judicial work that will take place at the new site affects every Georgian.”

The judicial center’s span of six floors and a subsurface level will provide occupancy for 200 employees. It will include two wood-paneled courtrooms, one of which on the top floor will serve nine Georgia Supreme Court justices. The second will be located on the second floor serving 15-18 Court of Appeals judges.

Office suites for judges, justices, and their clerks will be included in the interior layout of the building. Additional office space is being designed for administrative and case research functions, and a surface parking lot to the rear will offer a secure entrance for state employees. Temporary office space for current employees of two state agencies expected to vacate the building will provide room for future growth.

A report from the Daily Report contributed to this story.