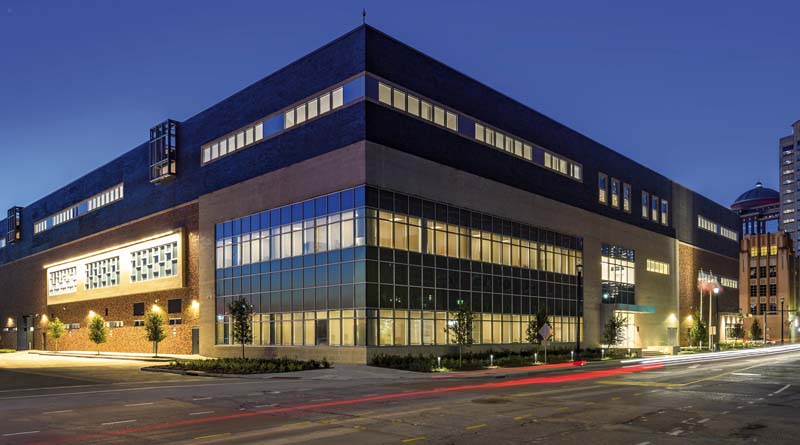 The $82 million project was designed by PGAL and built by Clark Construction. Representatives from Clark Construction, joint venture partner Horizon Group International, and representatives from Harris County and the City of Houston including Sheriff Ed Gonzalez, Mayor Sylvester Tuner, and County Judge Lina Hidalgo, all gathered at the ceremony to celebrate the completion of the new facility.

The Joint Processing Center replaces the existing undersized and aging Inmate Processing Center and centralizes inmate processing operations for both the Houston Police Department and the Harris County’s Sheriff’s Office.

“It was a privilege for PGAL to lead a project that so uniquely impacts our community by streamlining law enforcement responsibilities for both the city and the county,” said PGAL Principal Cheryl Gajeske, who served as principal-in-charge for the project.

“This facility saves significant taxpayer dollars and keeps more officers patrolling our community – resulting in a higher level of public safety. Finally, it represents a new era in cooperation between Harris County and the City of Houston – finding the best and highest use of common resources.”

The structure is concrete, complete with a brick façade and ribbon windows. The interior walls contain security glazing at all detention areas to meet jail security standards. A secure-zone tunnel system, constructed under an active roadway, connects the Joint Processing Center to old and new jail facilities. Additionally, a new paved road on the north side of the facility provides access to the north entrance.

Clark Construction performed 12 months of preconstruction services before breaking ground in January 2016 on the project. The phased construction project consisted of a basement with two tunnels to connect to existing and future jails, joint sheriff’s and police processing departments, county and municipal courtrooms, inmate holding cells and housing dormitories, and medical/mental health screening and re-entry facilities unique to inmate processing.

PGAL designed the facility based on an open waiting concept for general processing, thus creating an efficient, normative environment for all facility users. According to PGAL, this concept improves the flow of inbound and outbound detainees by better leveraging available staff resources and allowing officers to direct identified detainees to the appropriate processing areas.

“This streamlined, expedited booking process is a true game-changer for Harris County law enforcement families,” said Sheriff Ed Gonzalez. “Every minute an officer spends escorting a prisoner through the intake process is another minute that they’re off the street keeping our neighborhood safe.”

Used in conjunction with enhanced areas for medical and mental health screening, diversion workstation areas were created to provide incarceration alternatives, such as the Neuropsychiatric Center or Sobering Center. These areas can expedite eligible detainees to post bond or pay fines without entering the jail area.

Re-entry Program areas were created to reduce recidivism by providing discharge planning and other transitional services for outgoing prisoners, including housing, work programs, veterans’ services, faith-based programs, and other community treatment and services.