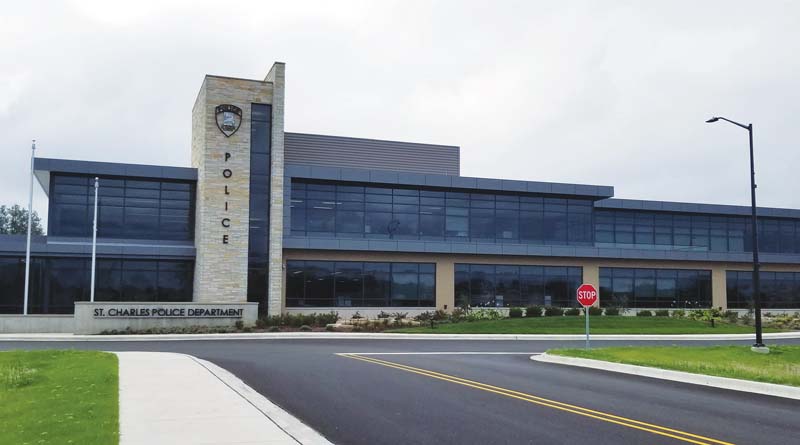 The 56,000-square-foot facility replaces the nearly 100-year old police station at 211 N. Riverside Avenue, which after many retrofitting attempts over the years had reached the end of its life.

Located at 1515 W. Main Street, the new police station sits on 6.5 acres and is on the site of the former Valley Shopping Center, an area that had remained vacant for many years and was in need of revitalization. At this new central location, there is room for expansion if needed.

St. Charles Deputy Police Chief Erik Mahan said this new station is expected to serve the city’s needs for the next 50 years and will be a “much more efficient space” for the department’s operations.

Originally, the $24.6 million project was slated for completion this December, but was completed ahead of schedule and under budget. The architect on this project was FGM Architects of Oak Brook, Ill. Riley Construction of Lake Bluff, Ill. served as construction manager.

Features of the exterior of the new St. Charles Police Department station include:

The interior of the new building includes:

“The completion of this project is the direct result of the hard work and dedication of the entire project team,” said St. Charles Chief of Police James Keegan. “The City of St. Charles, our residents and staff have a modern, efficient and 21st-century police facility that the entire community will use and benefit from for generations to come.”

An official dedication ceremony and open house will be held on November 9 will include tours of the facility.

The future use of the former St. Charles Police Department facility has not yet been determined, said city officials said.