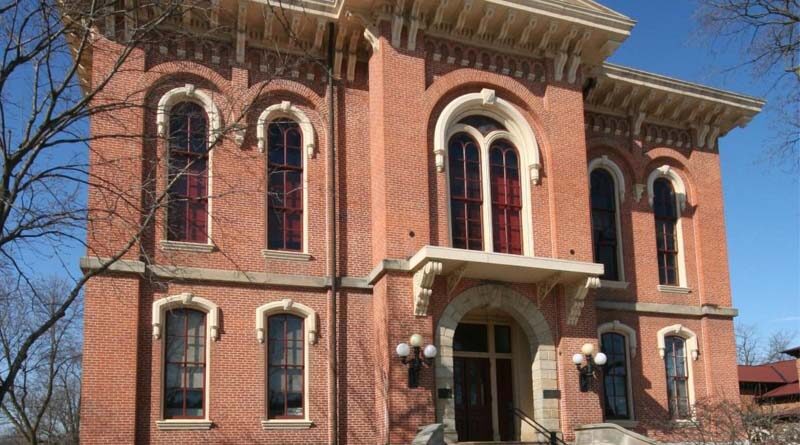 The approximately $9 million restoration of the 151-year-old Delaware County Historic Courthouse in Ohio is near completion. Photo Credit: Schooley Caldwell

DELAWARE, Ohio—The year-long $9 million restoration of the Delaware County Historic Courthouse in Ohio is near completion.

The courthouse will be ready for its new occupants later this month, which include the county commissioners and their staff, the administrator’s office, the county’s human resources office, economic development department, and communication personnel.

Built in 1869, the courthouse has been modernized throughout, while preserving and paying homage to many of its vintage features.

For example, a mural showing Ohio’s great seal, beneath an eagle and surrounded by U.S. flags will be on display. The mural was hidden behind drywall for many decades.

Another interesting feature are the building’s fireplaces—the only source of heat in 1869. While they are not functional, they will be on display, along with the courthouse’s original wooden floors. For more than a century, they have been covered with various flooring surfaces.

There is also a painted 15-foot tall window on the west wall. Prior to the restoration, the entire window was not visible inside the building.

Other historical features include a large safe, stonework forming interior walls, in addition to original railings surrounding a staircase.

New restrooms have been added to each floor with tile floors and wooden panel dividers reminiscent to what was originally installed in 1869.

A statue of a Civil War Union soldier has remained in front of the building during the renovation. Monuments commemorating other wars were temporarily removed but will be reinstalled when a Veteran’s Plaza is added behind the Civil War statue.

In a statement, Delaware County Administrator Michael Frommer said it has been a challenge to shift the courthouse to modern office functionality, but added, “The building is going to be fantastic when it’s completed.”

Added Delaware County Facilities Director Jon Melvin, in a statement, “It’s a major investment in the history of Delaware County. It’s a 150-year-old building, and we’ve done a complete renovation—brought it up to today’s modern standards mechanically with HVAC system, with fire suppression and technology—and still maintaining the character of the historical nature of the building.”

Schooley Caldwell is the architect on the project, and the Altman Company is the general contractor.

Earlier this year, the county’s judges and courtrooms moved into the new $39 million courthouse building that was completed last year. This project was awarded a Design Excellence Award by the West Virginia Chapter of the American Institute of Architects.