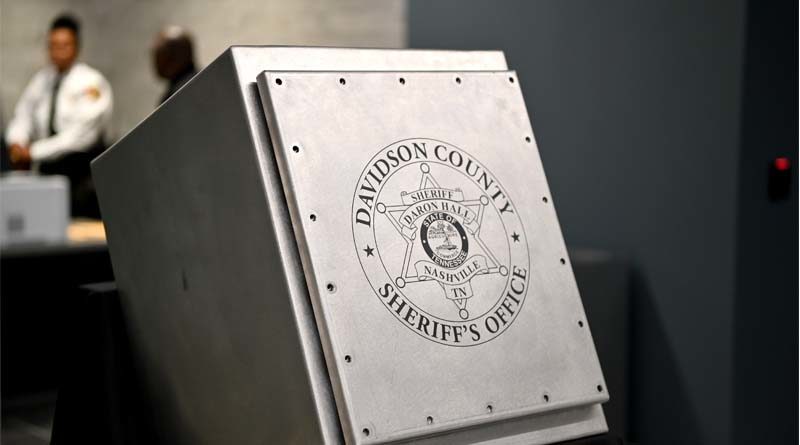 Among the items included in the time capsule are a commissary menu, copy of the Tennessee Supreme Court order suspending jury trials due to COVID-19, and a DCSO flag. Photo Credit: Davidson County Sheriff’s Office.

NASHVILLE, Tenn.–Davidson County Sheriff Daron Hall, along with Metro Councilmember Brett Withers, and several Davidson County Sheriff’s Office (DCSO) employees, recently contributed items of historical significance to a time capsule. After the ceremony, it was sealed and placed in a display area with instructions to open in 2058, the sheriff’s office 275th anniversary. The event marked the official opening of DCSO’s first-ever headquarters located at the corner of 710 South Fifth Street and One Jerry Newson Way.

Construction of the nearly 80,000-square-foot, $32 million, LEED-certified building began January 2019. It is now home to nearly 200 employees and includes all administrative offices, training academy, civil warrant division, records division, standards, community engagement, and investigations. Some divisions, such as the orders of protection unit, will operate 24/7 and no inmates are housed at this location.

“We have been on a seven-year journey to consolidate and streamline our services with efficiency in mind. This effort began with construction of our new Downtown Detention Center, which opened last year, and ends with a new headquarters,” Hall said. “Employees here previously worked in five separate locations across the county. Now, we are calling east Nashville home and are happy to be part of the Envision Cayce community.”

Among the items included in the time capsule are a commissary menu, copy of the Tennessee Supreme Court order suspending jury trials due to COVID-19, a mask, DCSO flag, remote speaker microphone used by deputies, and an American Jail Association magazine featuring DCSO correctional officer Kennyssa Graham on the cover.