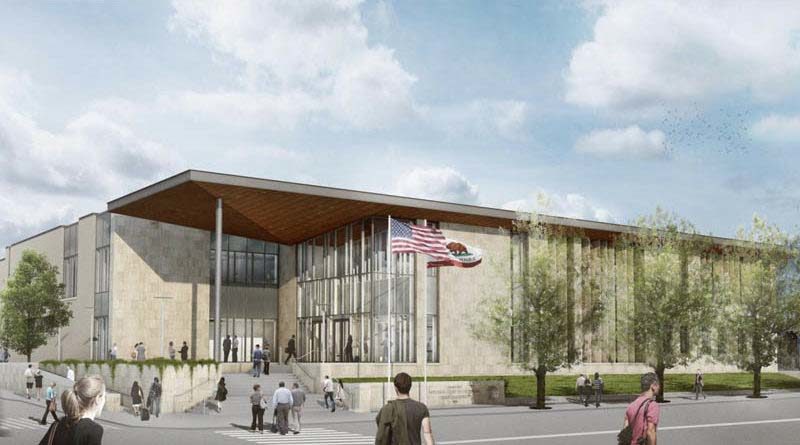 San Francisco-based architecture firm EHDD handled the design for the project, in addition to AECOM as CMA and McCarthy Building Companies, Inc. as CMAR.

According to an article from the Siskiyou Daily News, the first floor of the three-floor complex has a Family Law Facilitator office which includes offices for attorneys and a classroom that is equipped with 45 wireless access points. The child custody counselor, children’s area, probate investigator, and mediation offices are glassed in for observation.

Behind the courtrooms are stationed 28 clerk station cubicles, each hosting dual monitors and height-adjustable desks—plus a staff break room, high-capacity fire cabinet area, a training/conference room with camera and projector, an IT room and managerial offices, according to the Siskiyou Daily. Each courtroom has its own designated holding cell, interview, and witness rooms.

Upstairs hosts four of the five courtrooms, a spacious jury assembly room, three jury deliberation rooms, and an open waiting room. The courtrooms have a 98-to-120-person capacity, with the largest courtroom employed for felony trials.

Designed to be uniquely reflective of Yreka and its character, the building’s scale and material palette complement the neighboring historic downtown. The building’s massing reflects its environment with a monumental entry and façade along the commercial frontage road of Fourth Street—m combined with the more private functions and a smaller massing on the west in response to the nearby residential neighborhood. The substantial use of wood at the entry canopy and for ceilings within the public spaces reflects the importance of the material in a community whose economy once leaned heavily on the timber industry.