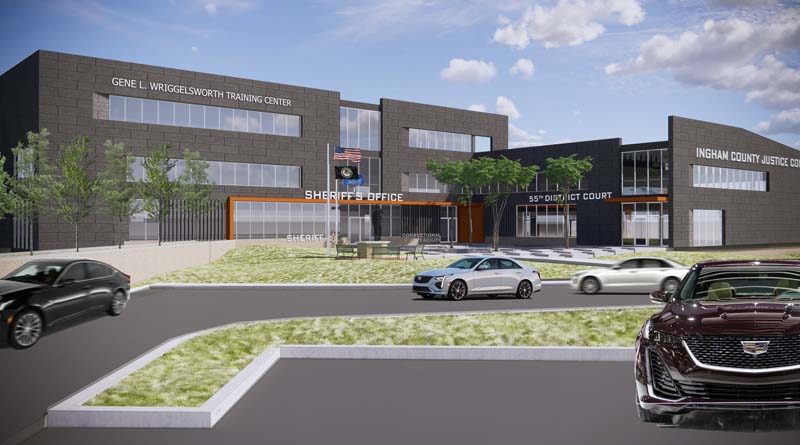 MASON, Mich.—Construction is now underway in Ingham County, Mich., on the 169,472-square-foot Justice Complex, designed by holistic, multidisciplinary design firm BKV Group. Located at the intersection of Buhl and Cedar streets in the county seat of Mason, the $70 million development will house a new Ingham County Sheriff’s Office, Correctional Facility and 55th District Court facilities and is being built adjacent to the existing justice complex, which will remain in operation throughout construction. First occupancy of the new building is scheduled for early 2023, with completion anticipated that fall. Ingham County selected Lansing, Mich.-based Granger Construction as construction manager.

“The design of the new Ingham County Justice Complex improves not only the aesthetic experience of visiting and working at the center, but also the overall functionality and efficiency of the site,” said Henry Pittner, partner at BKV Group. “Our challenge was to create this upgraded building in a way that allowed the existing facility to continue operating at full capacity while also answering the county’s request for a truly modern structure that provides a safe, secure environment for staff, inmates and visitors.”

In accordance with current trends in justice facility design, the new Ingham County Justice Complex situates the public spaces for the sheriff’s office and courthouse facing a public central plaza, allowing for ample daylight in those areas of the building and symbolizing transparency in justice. Wayfinding features to improve access to the facility include easy-to-read site and building signage, a single public parking lot that directs visitors to the central plaza and separate designated entrances to the three components of the facility.

Staff, inmate, court transportation and service entrances are sectioned off from the public. Staff parking and service areas will be secured with fencing and are further separated by a double-height retaining wall that takes advantage of grade changes. Lighting and low landscape plantings follow Crime Prevention Through Environmental Design principles, strategies aimed at the intentional planning and management of natural and built environments for enhanced safety and security.

“Utilizing data from past incarcerations, BKV Group designed the new correctional facility to prioritize inmate safety and support their physical and mental well-being,” said Ingham County Sheriff Scott Wrigglesworth, who led the public education effort to help voters understand the county’s goals for the new complex. “Intentional design decisions like integrating the medical and mental health clinic between the two main housing units, providing a visually and acoustically separated high observation area, and creating expanded program spaces with direct access to the housing units will benefit inmates during their time in our facility and set them up for success upon release.”

To minimize the impact of construction, BKV Group situated the building on the eastern end of the site, replacing existing parking lots and vacant land. This preserved the existing facility for ongoing operations and kept the courthouse, which accounts for the greatest amount of public traffic, as far as possible from the construction. The compact and vertical design of the new complex – whose components range from two to four stories in height – minimizes site coverage, which translates to lower soil remediation, site dewatering and foundation costs. By taking advantage of grade changes, the design also allows for the public entrance to sit a full story above the jail.

“BKV Group worked with us to create a building that conveys a greater sense of transparency and comfort while serving as a source of civic pride for the surrounding community,” said Bryan Crenshaw, chair of the Ingham County Board of Commissioners. “Not only have they helped us realize our vision for this new facility, but they have done so while staying within budget and minimizing disruption to county services during construction.”

Other Michigan-based consultants include Fleis & VandenBrink of Grand Rapids, which is providing site civil engineering, surveying and landscape architecture, and Matrix Consulting Engineers of Lansing, which provided the building engineering concepts.

“The Ingham County justice system values of transparency and humanity are reflected in this new building design,” said the Honorable Donald Allen Jr., judge of the 55th District Court. “We are grateful to the many people and organizations that made this possible, especially our voters, who saw the wisdom in supporting a new state-of-the-art facility.”

For more than 40 years, BKV Group has designed and delivered community-enhancing projects across a multitude of sectors including market-rate multifamily, student living, senior housing, affordable housing, government and federal, education and library, corporate and commercial, hospitality and mixed-use.