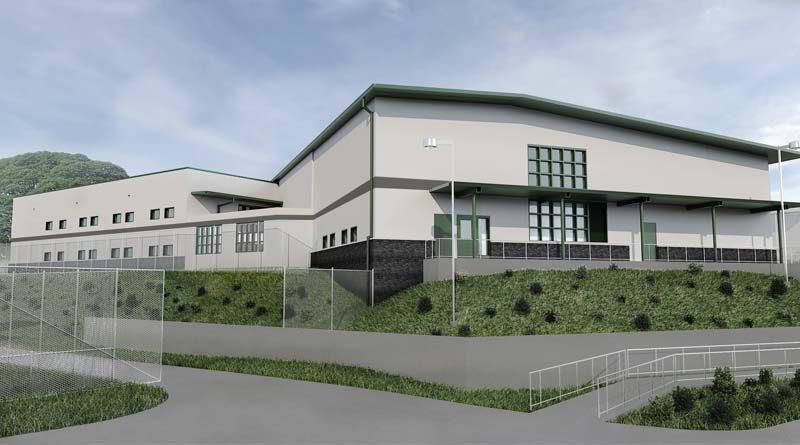 HONOLULU—The Hawaii Department of Public Safety (DPS) broke ground in July on the Women’s Community Correctional Center (WCCC) in Honolulu, marking a key milestone for the project that aims to greatly improve the conditions of female offenders.

The new and expanded WCCC will allow for transfer of all females housed in the overcrowded Oahu Community Correctional Center (OCCC) in Honolulu and better serve the pre-trial and sentenced female offenders.

This project originated to centralize all female inmates across Hawaii in one location through the addition of a 180-bed facility, with a priority to provide gender-specific programming not previously available at the men’s facility. Another critical focus is to provide space for personnel members that is a supportive environment to help attract more staff and reduce turnover.

The project comprises a secure housing unit, administration building, and intake/visiting building; the three new buildings total 56,121 square feet along with a parking lot, secure fencing and sallyports to furnish safety and security.

The large canopy trees are an eye-catching aspect that originated throughout the planning and design phases. Exterior materials, meanwhile, were thoughtfully chosen to reflect the aesthetic of Hawaii using lava rock material and cast stone accents. The interior is designed to offer clear and easy wayfinding with ample areas of natural light for public and in-custody and for all staff workspaces.

The WCCC will allow Hawaii to continue expanding female services for the next 50 years, which should have a strong impact on reducing the overall female recidivism rate.

In 2015, Hawaii hired CGL to assess all of its state-run corrections and detention facilities; as the project evolved, CGL began heading the planning and design efforts for the new WCCC.

In 2018, the Hawaii Legislature appropriated $40 million for new consolidated housing and other related improvements to WCCC to allow for the transfer of all female pre-trial detainees from the Oahu Community Correctional Center (OCCC). Relocating females from OCCC to WCCC will improve living conditions, expand treatment and rehabilitation services for women, and increase opportunities for family visitation.

“This long-awaited project will provide women with better access to services and improved living conditions. The new addition will also help ease some of the overcrowding at OCCC. As the state’s largest jail, OCCC’s primary population is male pre-trial detainees, and it’s a daily challenge to house females within the jail and provide program space,” said Governor David Ige.

“Improving WCCC to accommodate females from OCCC has been a goal of the Department for many years,” said Department of Public Safety Director Max Otani at the groundbreaking. “And today we’re taking a giant step toward realizing that goal”. An upgraded and expanded WCCC will help us house the current population while providing the critical space and resources that female offenders need to successfully return to their communities.”

Construction on the project is expected to take approximately two years.

Reports from CGL and the Hawaii Department of Public safety contributed to this article.