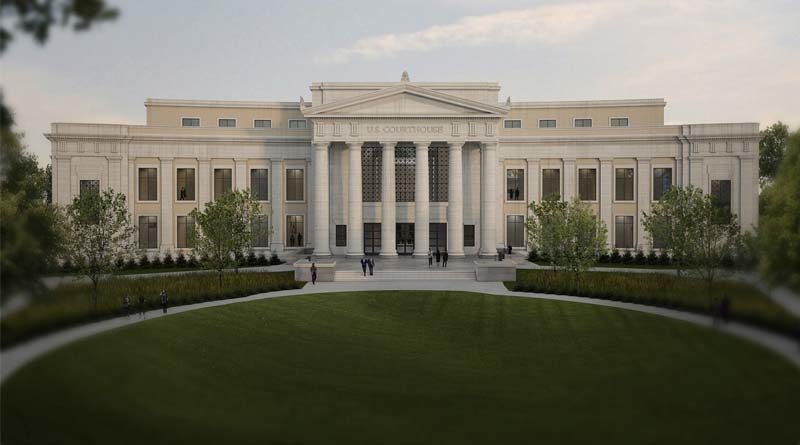 Construction is slated to kick off next year on the new federal courthouse coming to Huntsville. Photo Credit: Fentress Architects

Construction on the 123,000-square-foot federal courthouse is slated to begin in spring 2022 and will take approximately 30 months to complete. Once built, the courthouse will serve as home to the U.S. District Court for the Northern District of Alabama and the Bankruptcy Court of Northern Alabama, in addition to providing workspace for several other federal agencies, including the U.S. Marshals Service and the U.S. Attorney’s Office.

“This contract award is a significant step in our work to bring a long-awaited, new federal courthouse to Huntsville—which has been a priority of mine for over a decade,” said Sen. Richard Shelby of Alabama. “I am proud that GSA has chosen a local Alabama company to head up the construction. In 2018, I worked to secure $110 million in funding through appropriations legislation for this very project. I am confident it will have a lasting impact in North Alabama, and I look forward to its completion.”

“Our goal with this project is to provide a safe and secure work environment that meets the 21st century needs of the federal judiciary,” said Kevin Kerns, acting Regional Administrator for GSA’s Southeast Sunbelt Region. “Throughout this process, we’ve collaborated closely with the City of Huntsville, and we’re extremely thankful for that partnership.”

The new courthouse’s design is neoclassical in style, with a large pedimented entry portico flanked by gently arcing symmetrical wings; it incorporates modern security, sustainability and technological features necessary for a contemporary federal courthouse, while integrating classical organizational, proportional and design elements. In addition, the design showcases a large formal public lawn with symmetrical plantings that will help both to create a sense of space and also offer gracious views.

In addition to the new Huntsville courthouse, construction also continues on a new federal courthouse in Anniston, Alabama. Work on the 63,000 square-foot facility is anticipated to be complete by early 2022.