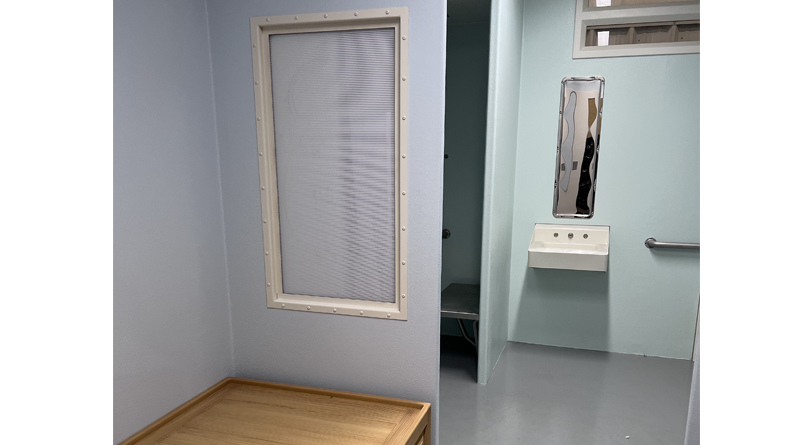 BALDWIN, Ga.—The new face of Mental Health in Jails and Prisons, has found a home in Baldwin, where the world’s largest factory dedicated to modular steel jail and prison cell production is revolutionizing the corrections industry.

The positive initiatives in modern incarceration and rehabilitation are now taking hold in correctional facilities throughout the USA, Western Europe and a multitude of civilized countries throughout the free world.

The attitude of “Lock them up and throw away the key,” has heretofore resulted in the construction of millions of jail and prison beds ignoring the causes of crimes and the potential for intelligent rehabilitation pathways and the concurrent reduction in recidivism. Three strikes and you’re out, truth in sentencing laws, overzealous low level drug user incarceration, and illegal immigrant lockups have done its damage to our society and to the world.

To further exacerbate the problem, in the 1980’s, major cities and states elected to close their aging and antiquated public mental health facilities, eventually resulting in mentally ill patients ending up on the streets to fend for themselves. It didn’t take long for crimes of need to put these lost souls on the doorsteps of city, state and federal lockups.

Correctional administrators know that the construction and operational costs for general population correctional facilities was an extremely daunting task by itself. With the addition of psychiatric beds, the correctional staffers now took on the role of pseudo psychologists and psychiatrists. Obviously, the facilities could not handle this task and would have to outsource companies and services for this job. The problem was complicated by the lack of funds to adequately address the problem. The unfortunate result was more of a sedation and calming protocol with no real effort to determine illness cause, appropriate treatment and rehabilitation pathways. The correctional professionals did the best they could with the cards that society dealt them.

Eventually, clear thinking, well informed correctional administrators and governmental agency executives recognized that geometric growth in building and operating more and more jails and prisons throughout the world would exceed hundreds of billions of dollars and would accomplish absolutely nothing in rehabilitation and reducing recidivism for mentally ill inmates, juvenile offenders as well as the overall general population. The old approach only promulgates the vicious incarceration cycle. The new mindset is now transforming the industry.

A consulting client of Michael Rosenberg asked the question, “Why Georgia?”

Aside from having some of the most beautiful golf courses in the world, Georgia and a few of the surrounding states and a few in the Midwest has been the hub of leading detention equipment manufacturers and contractors for many years. These companies have been pioneers and innovators. Some have exhibited the ability to take existing well-built, well-designed products and turn them into extraordinary forward-thinking masterpieces.

SteelCell of North America, Inc., based in Baldwin, Ga., listened carefully when several correctional facility administrators started asking for a more normalized living unit for Juveniles and for Behavioral Mental Health Prefabricated cells. SteelCell began to establish their own behavioral and mental health “method” where they aggregated data, developed innovate award-winning designs and products, and engaged experts to help guide these new environments.

The new normalized living units create a passive hygienic environment. While the look is soft, the units steel walls are heavy gauge galvannealed steel. Unlike concrete cells the new units are non-porous and do not absorb odors, and therefore don’t have the heavy smell of urine or body odors normally attributed to concrete correctional facilities. They are more secure than concrete and require little if any maintenance to floors walls or ceilings.

This firm, whose predecessor companies and network firms are the oldest and most experienced detention cell manufacturers in the world. Together they are dedicated, providing better solutions that result in better outcomes for patients and their clients. They are leading the way in the delivery of normalized living units as game changer in the battle to rehabilitate human beings and reduce the recidivism rate throughout the world. The world definitely has Georgia on their mind.

Another firm, The Pauly Jail Building Company based in Noblesville, Ind., is the oldest detention equipment contractor in the USA. They too have recognized the need for Behavioral Mental Health Prefabricated Cells. Joseph Pohrer III and his family firm have roots going back to 1856. Joe is the premier innovator and expert in the field. He and his firm and his team of related suppliers and manufacturers will be having a seminar April 20th 2022.

Michael J. Rosenberg, is a 30-year consulting veteran, and is considered to be one of world’s leading authorities on incarceration. He is a graduate of Columbia University with a BS in Pharmaceutical Science.