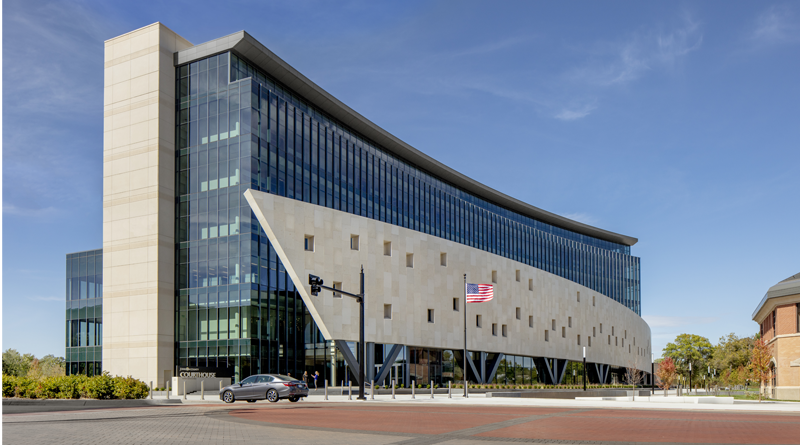 The Johnson County Courthouse project is a prime example of how the design-build teamwork can overcome challenges. Photo Credit: JE Dunn

Design-build integrates owner involvement in the design, and all parties receive regular budget updates. This delivery allows a budget to be established early on when the design and construction teams are developing the design together. If the project has a predetermined budget, the owner and design-build team can collaboratively design to budget to ensure priorities are met and the project receives the best value for every dollar spent.

Escalation is playing a huge factor in construction project budgets. The design-build method allows for streamlined design and construction where estimating, budgeting, and bidding of construction packages occur throughout the process, allowing early construction packages to begin sooner than traditional hard bid projects. This can save up to three or four months and reduce escalation, which is currently at least 1% per month. On a $100 Million dollar project that could save around $3-4M in escalation costs alone. On some design-build projects a shared contingency is developed where any remaining money can either be refunded to the owner, split and shared, or reinvested in the project for additional features.

Design-build projects normally have more unified teams with common goals for all parties. Partnering sessions are conducted early in design-build projects, which include the owner’s stakeholders, design team, and construction teams. Together, they create a project charter that identifies and prioritizes common goals and objectives. With continuous owner involvement, there are fewer surprises as the owner is informed and involved from design through construction.

Design-build projects instill an environment of trust with mutual respect for and appreciation of diverse perspectives and ideas. There is a commitment to innovation and creativity to drive quality, value, and sustainability as well as a sense of professionalism, fairness, and honest communication—all which result in shared success.

The Johnson County Courthouse project is a great example of how the design-build teamwork can overcome challenges. A collaborative mentality was fostered through a partnering kickoff session with all parties before the project commenced. At the beginning of the project, the team was faced with a design that was slightly over budget. Using a progressive design-build process and collaborating with our partners, the team developed more than 175 potential value engineering (VE) options, then presented the 38 best options, which reduced the construction cost by over $10 million while still maintaining design and functionality.

In addition, the substantial completion date finished ahead of the original schedule. The JE Dunn/Fentress/Treanor HL team’s work in the early stages of planning resulted in a reduction of the overall duration of construction by three months. This allowed more time for furniture, fixture and equipment installation, staff training, and move-in. Mike Comer, DBIA, JE Dunn Project Executive said, “The design-build process for the Johnson County Courthouse resulted in one of the smoothest project closeout experiences I have ever been involved with. The overall project budget did not increase, and the owner has had positive feedback on the design, function, and quality of the new courthouse from county administrators, the public, judges, and law enforcement.”

Designed to last 75 years, the courthouse was planned to accommodate Johnson County’s expected growth of 10,000 residents per year and to fulfill its goal to reduce energy use by 30 percent. The building is tracking toward LEED Gold certification and incorporates principles of the WELL Building Standard and was awarded the Design-Build Institute of America’s Project of the Year for the Mid-America Region DBIA.

State of Kansas corrections leaders faced a significant challenge: improve the level of services with less money. The state needed to provide a safe and secure facility without additional costs to Kansas. The project team heard the concerns and worked together to develop a concept that reduced the number of staff needed and improved operational efficiencies. The KDOC/JE Dunn/DLR Group/Treanor HL design-build team delivered a solution that not only provided a new, modern facility, but one that has a neutral effect on the state budget.

Utilizing a design-build method where key participants were on board early to establish goals and requirements was critical to the success of the Lansing Correctional Facility. It fostered collaboration and enabled innovative solutions tailored to the needs of the facility itself as well as the budget.

KDOC had certain approval requirements and protocols, which were critical to schedule and manage. After understanding KDOC approval requirements and protocols, the team incorporated approval milestone dates into the schedule. This approach also included multiple bid packages to accelerate the construction start date, which yielded an earlier occupancy date.

Implementing modular precast shaved significant time off the schedule and maximized dollars. After evaluating the cost and schedule implications of modular precast cells, CMU, and metal cells, precast proved to be the most efficient and effective option for the housing units. These modules were used from slab-on-grade up to the roof level to support the roof structure. This approach eliminated the need for additional structure at all levels, in turn removing additional cost and time.

Thanks to early collaboration and a commitment to delivering with design-build, there were zero change orders on the project. The project includes two new inmate housing units (2,048-beds) in one story, a 512-bed minimum security dorm, medical services, food service and support areas, as well as an indoor and outdoor recreation area, and improved lighting and security. Project savings allowed approximately $1 million of additional owner-requested scope to be incorporated into the facility.

The Justice market continues to see tremendous growth in design-build delivery for new construction across the country, evidenced by $8.3 billion planned for the four Borough Based Jail Projects in New York utilizing the delivery method. Other major design-build criminal justice projects are also nearing award and contracts from Alabama to California.

As these significant projects are commencing, owners and operators are looking to design-build delivery to save time and money and increase the efficiency and coordination of the design and construction process.

Doug Beichley, AIA, DBIA, NCARB, LEED GA, is a Senior Design Manager with JE Dunn Construction in Kansas City and is the President-Elect of the Mid America Region of the Design Build Institute of America.