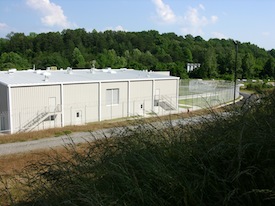 “The old detention center was the oldest detention center in the state at that time,” says Sheriff Keith Lovin. “It was inefficient and costly to run as well as unsafe and unhealthy. Our daily average population was twice the capacity and the expense of renting space for inmates over the last two years, in the old center, exceeded $220,000 each year.”

Lovin says the original detention center was built in 1922 and had been renovated many times.

“It was the only oil-fired boiler system in the state, which meant that there were no parts available when it malfunctioned. The windows wouldn’t close, the plumbing was inadequate and there were other equipment maintenance issues as well.”

If that wasn’t enough, the previous sheriffs’ office was a single-wide trailer behind the old jail. “We obtained two used mobile classrooms from the school system and put them on the other side of the parking lot behind the jail eventually,” he says.

The new 11,567-square-foot sheriffs’ office and 31,000-square-foot jail are actually phase I of the master plan for the Cherokee County Justice Center, which is situated on a site just a few miles from the heart of Murphy, N.C. The justice center has 25 full-time employees and three part time staff.

Future plans include a 300-seat and 150-seat courtrooms that tie into the jail and sheriff’s office. And other departments, such as the Clerk of Court, which would move into the courthouse, is scheduled for phase II — currently on hold.

“If built, it would hold the clerk of court, hearing room, jury pool room, registrar of deeds, tax office, mapping, county manager and courtrooms,” says Mike Barnes, vice president of Pease Engineering & Architecture PC of Charlotte, N.C., which in addition to being the architect is also the multi-disciplined designer for this project.

“We started designing the detention center in November of 2004,” says Barnes. “We also completed the architectural, mechanical, electrical, structural and plumbing engineering on the project, as well as the construction administration.”

In designing the justice center, each building can grow as necessary without impacting other building or governmental functions. The sheriffs’ office was relocated to support the needs of the jail and respond to current space needs. It houses the drug task force team, sheriffs’ and detectives’ offices, squad room and processing laboratory for property and evidence. Meanwhile, the jail is sustainable, with doctors’ offices, laundry rooms and a kitchen, and is equipped with the latest technology for detention facilities — including video visitation — and includes maximum-, medium- and security-housing (122 male and 28 female inmates). There is also dry storage, a booking area, control rooms, day rooms, chapel, nursing station and magistrates office.

Barnes says the most unique aspect was designing the facility so that the shell of the building could be built first, then the steel cells were installed.

“This allowed for the installation of the cells to proceed in a protected environment. We had to discard our conventional ways of designing and constructing a jail facility. In order to produce an economical, yet quality project — in a short amount of time — the traditional way of using standard precast cells would not have worked here.”

Construction on the new justice center began in October 2006. Just as the design was being completed, Cherokee County hired Wells & West of Murphy, N.C., as the construction manager at-risk to construct the facility. However, it was soon determined that the county’s budget and the design the architect offered did not match, says Chuck West, vice president of Wells & West.

“Therefore, we immediately went outside the box. In a multi-month pricing and redesign process, we determined that we could give the county the area and beds it was looking for if it would go along with our construction methods and ideas. At the end of the day, we offered a low maintenance metal building, prefabricated steel cell units, redesigned HVAC systems and durable — yet pleasing — interior finishes.”

This redesign ended up saving millions of dollars for the local government and shaved months off the schedule due to construction in a controlled environment. The project was completed less than two years later in July 2008. As well, at the end of this project, West was able to return more than $200,000 and over $250,000 of owner-requested change orders at no cost.

“The only change orders on this project were those to add the sheriffs’ office and to finish out one segment in the main pod,” West says. “Through the construction management process, local subcontractors performed approximately 50 percent of the work and we performed the remaining. Wells & West has the ability and licenses to self-perform all trades. This takes quality control to the next level by constantly supervising subcontractors with qualified personnel and assisting them when needed.” 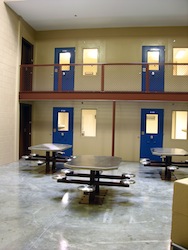 Designed for future growth as the county’s need expand, the Cherokee County Detention Center is the first piece of a larger county justice complex. The design can accommodate additional cells, a sheriffs’ office expansion and future courthouses.

Additionally, the layout allows for two additional 100-bed pods to be dropped in, thereby creating a 350 bed facility. All support areas and utilities — kitchen, laundry, electrical, back-up power, medical and booking — are equipped to handle this.

As for the most unique aspect of the project from a construction perspective, West says it is definitely the metal building shell.

“Once the building was erected, the jail within a shell concept allowed us to work day and night in good weather, and bad, throughout construction,” he recalls. “Cell installation, masonry and all trades worked in a heated dry environment, greatly increasing productivity and quality. In all, over 80,000 concrete masonry unit blocks were installed creating secured walls within the structure. The modular or prefabricated cell concept allowed all cells on the job to be installed in 11 days.”

He adds that all cells were located so that rear chase access is available to maintenance personnel without entering the cells or day rooms. “This access opens up all mechanical, including plumbing and HVAC without interaction from inmates.”

The wall systems for the east, public side, of the center consist of different brick patterns with renaissance stone bull nose bands with steel channels for the base and cornice. All other walls are a two-inch insulated metal panel attached to the concrete masonry unit wall with steel channels top and bottom. The walls on the backside of the cell block are brick on CMU for the first 14 feet with insulated metal panels on the rest of the wall.

The materials and finishes for this project were selected for their long life cycle and reduced need for maintenance. The paint for exposed steel is warranted for 30 years for appearance and all fencing is PVC coated to be free from rust. The floors are hardened polished concrete, also requiring little maintenance.

Security at the jail has been designed around the movement of the inmates. When a prisoner arrives they enter into the vehicular sally port.

“The fence and gate were designed to be aesthetically pleasing since they are on the public side of the complex,” says Barnes. “The fencing is made of a wielded mesh that is unclimbable and does not require barb wire at the top.”

Once escorted through the sally port, the inmate is taken to the booking area that can be viewed by both control rooms. When escorted to the cellblock, access is through a large sally port that surrounds the control room.

Barnes adds that the detention center is not only a building for inmates; the public can come into the lobby to see the magistrate, visit an inmate through video visitation or pick up a released inmate.

“People also come to see the magistrate to sign a complaint, get a restraining order or get married. The concept is to create a welcoming space where people feel comfortable. Especially for the children of inmates coming to the detention center for video visitation, a trip to a jail can be a traumatizing experience.”