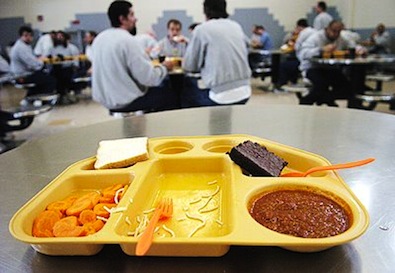 While the freedom of religion stretches behind prison walls, some inmates are taking advantage of the system.

Prisoners across the country are falsely claiming the Jewish faith in order to have access to a kosher diet, which they believe is a safer and better-tasting meal option.

The high amount of inmates lying about their religion creates many problems in the system — primarily, a cost concern. Chaplain Gary Friedman, chairman of Jewish Prisoner Services International, estimates that those inmates falsely claiming Judaism are costing a minimum of $5 more per day to be served a kosher meal. Over a year, that number adds up to more than $40 million dollars — an extremely conservative estimate by Friedman — to provide kosher meals to non-Jewish inmates.

It’s also causing problems for those inmates who truly practice Judaism and are in jeopardy of losing their kosher meal option.

“There are about 20,000 inmates now, that’s including jail and prison, who are falsely claiming to be Jewish just to get a Kosher diet,” said Friedman. “They’re not interested in anything else, they just want the kosher diet.”

Friedman, who has been in the correctional industry for 22 years, estimated that in his home state of Washington where there are 654 inmates on a kosher diet, less than 20 of them are Jewish by any traditional Jewish standard.

Inmates believe that the kosher meal plan is safer than the traditional meals offered to inmates. In order to receive a kosher meal, an inmate simply has to present their religion to correctional officials and request the diet. Some questions or concerns may be addressed, but certain laws restrict correctional officials from investigating an inmate’s claim to religious practices.

“There’s a lot of staff resentment towards inmates who are being manipulative — the problem is that they have to deal with the civil law standards, that essentially they have to treat an inmate as any faith they declare themselves to be — and that’s how this thing has gotten so out of hand,” said Friedman.

Not a New Concept

Serving kosher meals to inmates is a practice that dates back well into the 1800s. Friedman explained that about eight years ago, a complete synagogue was discovered at Eastern State Penitentiary in Philadelphia, Pa., the first true penitentiary in the country.

“They opened up a boarded area and there was a synagogue there including an area for preparation of kosher food,” said Friedman.

Initially, there wasn’t necessarily a problem with inmates falsely claiming to be Jewish. Inmates who were recognized Jewish members of society simply wanted to follow their religious practices behind bars, including a rabbi who was being held at a federal detention center in Manhattan in 1974, according to Friedman.

However, throughout history, inmates have gathered knowledge and taken advantage of programs put in place for those with special religious diets.

Most notably in New York in 2001, the Jackson v. Mann case involved an inmate that had been put on a kosher diet and was transferred to another facility in the New York State system. When he arrived the rabbi chaplain quickly recognized that he wasn’t Jewish by traditional Jewish standards and refused to approve the diet.

Eventually, a circuit court decided that he should be served the meals because he had established the legal terminology of the religion — a sincerely held belief in Judaism — which according to Friedman frequents in many lawsuits.

“The basis for him establishing his sincerity was that he was claiming to be Jewish for 10 years and during that time he had been reading the Torah,” said Friedman. “Correctional institutions are finding it very difficult, even though they are permitted to question sincerity to be able to determine sincerity, because of the restrictions of how you go about it.”

Then there were some inmates using the kosher meal plan for a different agenda all together, having nothing to do with the food being served.

Those on a kosher meal plan were all allowed to eat together — as it was much easier serving all kosher meals at the same time. Inmates in gangs would declare themselves Jewish in order to congregate during meal times. Washington State had an outbreak of gang violence due to this and eventually stopped dedicating kosher-only meal times.

“When you see an inmate with swastika tattoos all over him requesting a kosher diet it’s an insult to the system and clearly an abuse, but correctional officials feel powerless to control because the state of the law,” said Friedman.

Not all states have kosher meal plans and one has recently won a lawsuit eliminating the practice in some prisons. Forty-two states still provide kosher meal plans, however, and are being taken advantage of almost everyday, according to Friedman.

Some states have tried to consolidate the kosher meals, making them less attractive to inmates in order to reduce the amount of requests. According to the law, the food served to inmates must be nutritiously sound — but some states have offered much less meat and some have even considered consolidating all religious diets into essentially an all-vegetarian diet. The diet would still be considered kosher and nutritiously sound, but eliminates certain foods for those truly utilizing the diet for religious purposes.

“Personally, I have a problem with it because you’re essentially saying if an inmate wants to follow his religious diet he’s not going to be able to have meat for the rest of his life, if he is in fact serving a life sentence,” said Friedman.

Friedman is currently working with the Nevada Department of Corrections to construct their kosher meal plan. The Nevada DOC has 272 inmates on a kosher diet, serving them prepackaged meals — which is the most expensive option in terms of kosher meals, costing up to $15 a day for each inmate (a traditional non-kosher meal costs $2.00 to $2.50 a day per inmate). In order to cut costs Nevada has switched up the kosher menu to include soy-based products. The switch will save them $1.5 million a year, according to Friedman.

Though the meal plan may be different, it is still nutritionally sound and attractive to inmates. Five years ago in Pennsylvania, the corrections department tried to discourage inmates by making an unattractive kosher meal plan that consisted of cold cereal and milk, fruits and vegetables and a liquid protein shake. The state eventually received political pressure from the negative reactions to the meal plan and had to change it to a more appealing menu.

The current system has many flaws — but in many cases Chaplains are being called into prisons to help evaluate, and in some cases, counsel inmates who claim to be Jewish and are requesting a kosher diet. Once a Chaplain reviews an inmate — including background information and occasional calls to relatives, the Chaplain then gives his review and advice to the facility to decide whether or not to provide the inmate with a kosher diet. Not all jails have the budget to call in Chaplains but are doing everything in their power to take control of the situation.

“All we can do is tell them if we’ve been able to determine if someone is Jewish by Jewish standards — either born Jewish or properly convert, and you cannot properly convert while you’re incarcerated,” Friedman said. “About 95 percent of those we see we can tell immediately that the person is not Jewish. I get it all the time.”