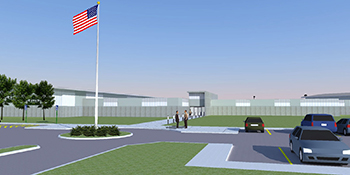 The new 75,000-square-foot addition and renovation project, designed by Treanor Architects of Topeka, Kan., specifically allows guards a direct line of sight into cells surrounding a secure control station, and will feature 200 medium- to maximum-security beds in the main cellblock. Fifty more beds will be located at the opposite end of the complex for minimum-security inmates participating in the facility’s work release program.

JE Dunn Construction of Kansas City, Mo., the project’s general contractor, along with Reno County correctional officials, chose precast modular technology as the desired method of construction for the housing units. Oldcastle Modular was selected to fabricate and provide the jail’s concrete cell modules, which were manufactured at Oldcastle Precast in Topeka, Kan. and shipped directly to the job site.

The 12-foot 9-inch by 7-foot, two-man rear chase precast cells were stacked two stories high, according to a statement by Oldcastle. The cell interiors were painted and outfitted with two beds (for two-person cells), a table, sink, toilet, and four breakaway hooks for clothing and towels. Additionally, the plumbing and electricity are already connected to the individual cells.

Meanwhile, the jail’s lower level cells feature a monolithically cast balcony acting as the walkway for the cells stacked above. A rear chase maintenance corridor along the outer perimeter of the cellblock will allow maintenance workers to repair plumbing and other systems without entering the cells. Oldcastle Modular completed the erection of all 64 modules in just four days, according to a statement by the firm.

The new facility will also include a four-bed medical suite, outdoor recreation space and a masonry-construction booking area all on 10-acre greenfield. Two program rooms and classroom spaces, used for a number of classes like cognitive thinking, domestic violence, anger management and GED courses, will also be added.

Prior to construction, Reno County’s correctional network included two jails and one 82-bed maximum-security facility. Though that facility was built in 1972, it followed a 1950s model with bars, concrete wall cells, poor visibility and poor ventilation. The inability to properly classify inmate due to the population crunch further complicated jail operations.

To manage rising numbers, county correctional officials had also renovated an old body shop, forming a two-pod jail annex. Despite this expansion, the county spent $633,000 on housing inmates out of the county in 2013. These costs will no longer be an issue for the county when construction is completed in June 2015. In a statement provided by Oldcastle Precast, Project Superintendent Andrew Jones said the jail construction is coming along “right on schedule.”

Further progress was also recently made on the facility’s official name. During an Oct. 14 vote by the county commission, Reno County Sheriff Randy Henderson successfully shifted the commissioners’ perception of the facility from jail to correctional facility.

“Frankly, in talking about the name on the facility, I wanted to stay away from jail,” Henderson told The Hutchinson News. “I wanted people to understand this is a different facility than what we have now.”