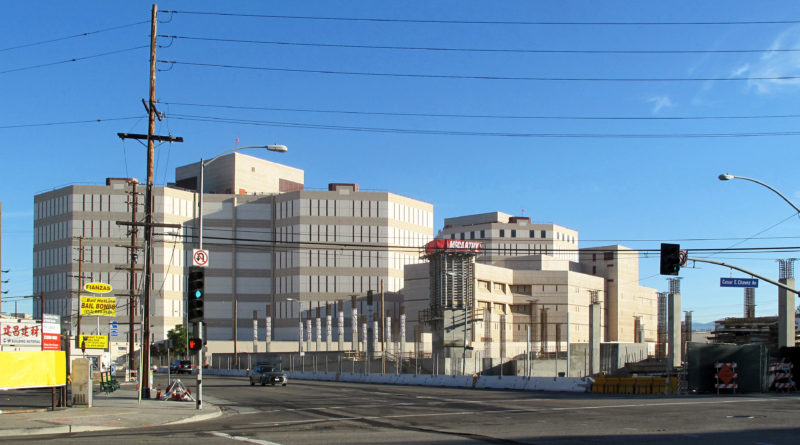 A proposed replacement of Men's Central Jail has been the focus of protests. Courtesy of WikiMedia Commons.

LOS ANGELES — If the ghouls and goblins of Halloween weren’t enough to strike fear in the hearts of Los Angeles County administrators, a group of protesters at an Oct. 31 Board of Supervisors meeting did their best to scare off an initiative to expand a pair of county jails.

During a meeting inside the Los Angeles County Hall of Administration, about 24 activists made their displeasure known regarding a planned replacement of the Men’s Central Jail (located in downtown Los Angeles) and an upgrade to the currently vacant Mira Loma Detention Center in nearby Lancaster, Calif.

The first project is a 3,886-bed facility that will house both male and female inmates. The second project will see the empty Lancaster property converted into a 1,600-bed women’s facility. Though designs have not been finalized, the collective price tag is expected to be about $3.5 billion.

In October, an  environmental impact report was released that found replacing the Men’s Central Jail would not significantly impact the surrounding environment if its recommendations were implemented.

Activists have protested the construction of the two facilities for several months. During the Halloween demonstration, they wore plastic shackles and spoke over the supervisors until they were escorted from the building by police.

The activists, led by Kim McGill of the Youth Justice Coalition and two other anti-incarceration groups, then stood outside the building and chanted “it is our duty to fight for freedom.” The Los Angeles Times reported that McGill addressed the group and proclaimed, “I believe that we will win.”

Nearly 70 percent of the inmates at Men’s Central Jail are believed to have had a mental or medical illness when assessed at the time of their incarceration. Proponents of the new facilities are intended to allay such issues.

Demonstrator Dayvon Williams said he was protesting because he thinks funds used to pay for the jails could be used to support community programs that work to prevent incarcerations in the first place.

“Just because you rebuild a jail doesn’t mean that the way you’re treated in the jail will change,” Williams said to the Los Angeles Times.