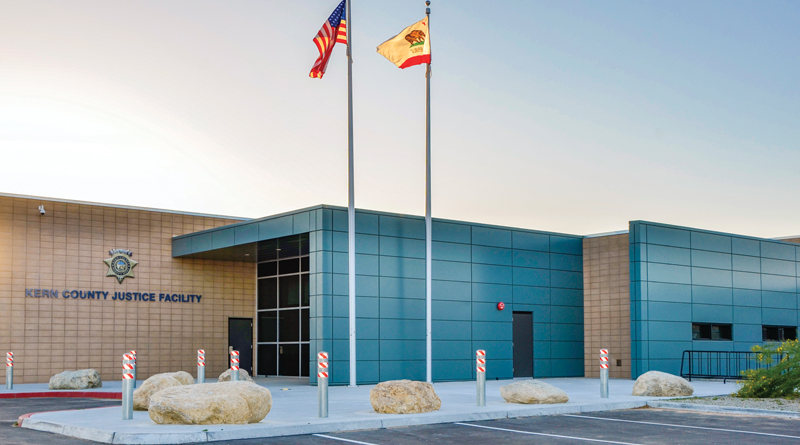 The new Kern County Justice Facility benefited from a design team that knew how to leverage its expertise to get the most from its budget. Photo Credit (top photo only): Kern County Sherrif’s Office

Assembling the right team at the right time may sound like a plot point in an Avengers movie, but teamwork is exactly the way the recently completed Kern County Justice Facility came to fruition.

Located on a 24-acre site in Bakersfield, Calif., the new 822-bed, 222,478-square-foot correctional facility is now a sibling of sorts to the existing Lerdo Detention Facility, which is located nearby.

Comprised of four housing pods, with a main control post in each, the new adult detention facility provides housing, inmate services and support predicated on an efficient staffing model and an eye to satisfying specific functional and aesthetic needs that benefited from firsthand experience of those on the ground floor.

“The facility design was driven by decades of staff experience that was detailed in our jail-needs assessment plan,” said Lt. David Reynolds, Kern County Sheriff’s Office, Detentions Bureau, Lerdo Inmate Services Section. “Numerous employees of the Kern County Sheriff’s Office, ancillary staff members and stakeholders came together and provided the documented narrative that provided the information needed for the schematic design of the physical facility and all the systems that support it.”

Naturally, any functional or aesthetic need driving final construction design was based on a combination of providing for the needs of the user while also meeting myriad legalities and code requirements inherent in corrections projects, Reynolds added.

“Throughout design and construction, the safety of the lives for all of the staff working in the facility and the inmates housed there came first,” Reynolds said. “In addition to that, inmate programs, the programming space and all of the ongoing challenges that are associated with reducing recidivism were also major driving factors in the design and final construction of the project.”

Likewise, according to Reynolds, finding efficiencies that could be baked into the actual building that could improve morale and working conditions became as important. Among these improvements were the implementation of natural lighting built into many of the security and administrative areas that allow for “an improved working and living environment for both the staff and inmates,” said Reynolds.

Also driving the project were funding mechanisms the county received from the state of California to expand its jail system — namely Assembly Bill 900, a law authorizing $1.2 billion in state lease-revenue bond financing for county jail construction, to be released in two phases to increase county jail capacity. The legislation required that the first phase of funding be expended by the end of June last year. Kern County was awarded $100 million by the state for the project in 2012 (the final design-build stipulated sum was just under $100.5 million). The facility is the most expensive and complex project ever attempted by the county. Consequently, securing the participation of the right team of partners was crucial to its success.

“The collaboration between the stakeholders was the key factor in being able to produce a facility that is successful in meeting the needs of all the different users,” said Reynolds. “The collaboration began with the support from our sheriff and administration, the large amount of time and effort that all of the Kern County stakeholders put into the jail needs assessment plan and continued throughout the design and construction with the contracted designers and builders.”

Among the partners were HOK Architects and design-build general contractor Balfour Beatty — both of which have offices across the nation. Construction management was overseen by national firm Kitchell, and civil engineering was the purview of QK Inc., with offices in Bakersfield, Calif. The detention/security design was overseen by Erie, Colo.-based CML Security and Columbia, S.C.- based Buford, Goff and Associates. National firm DLR Group also created the initial bridging design.

“The collaborative meetings that took place between the county stakeholders and our partners — DLR Group, HOK, Kitchell and Balfour Beatty — set the positive tone and structure to collect the huge amount of information that was needed to make the facility a success,” said Reynolds. “The individual and collective efforts of each stakeholder and team member added to the value of the collaborative process and the quality of the completed facility.”

HOK Vice President, Regional Leader, Justice, April Lenkey, AIA, agreed with Reynolds’ appraisal of the successful partnering of the various parties. HOK was particularly interested in working with Balfour Beatty, a leading international infrastructure group with whom her firm had been seeking a project upon which to collaborate.

“The Kern County Justice Facility project was the right opportunity that allowed us to qualify and start establishing a working relationship together. Our combined portfolio of county justice work and our local, Southern California office locations were contributing factors in our decision to team,” said Lenkey.

The Kern County Justice Facility was the first partnering with Balfour Beatty for the HOK Los Angeles office. With the team in place, the start date was set for December 2014, with completion accomplished in March 2018.

“I think the county wanted to get moving,” said Lenkey of the county’s timeline. “Once you’ve worked so long to get something out, you just want to find your final builder and architect and go in. I think that [due to the] level of the bridging documents, they weren’t asking for a design from scratch.

“We analyzed the RFP documents and determined early on that the county and sheriff’s office invested a significant amount of work into their bridging documents,” she continued. “By recognizing and acknowledging this at the onset of design, we focused our efforts on improvements to staff and operational efficiencies through very thoughtful tweaks to the plans and standardizing the construction as much as possible. This demonstrated to the county and sheriff’s office that we respected the time already invested with the bridging architect, yet had our own, unique ideas on how to improve the design and planning that they had already developed to a schematic level.”

Though HOK often enjoys more design authorship, working within the parameters established by the county did not prove at all difficult for the firm, according to Lenkey.

“Because our team strategy was established as a ground rule at the onset of the design-build proposal phase, we were able to demonstrate design restraint by limiting our focus and efforts to understanding the relationships of the spaces and the plans, and make them significantly better without fundamentally changing the overall planning concepts,” said Lenkey. “By doing so, the design improvements in turn also resulted in cost benefits that were reinvested into the project. We knew that cost was a concern and that the county issued the project as design-build in order to maximize the funds they had available to build probably more than they could afford.”